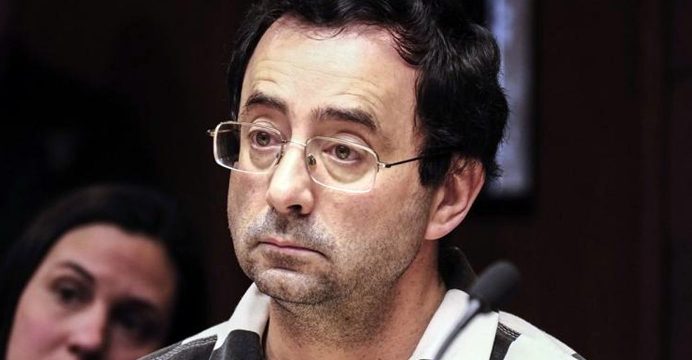 US athletes unveil accusations of abuse by doctor

Jamie Dantzscher, a member of the 2000 Sydney Olympic US bronze medal squad, was joined in coming forward publically by Jessica Howard, the US national rhythmic gymnastics champion from 1999 through 2001, and Jeanette Antolin, a US team member from 1995 to 2000.

Dantzscher was first seen by Nassar at age 13 after she earned a spot on the US junior national team but complained of back pain.

“He would put his fingers inside of me and move my leg around,” Dantzscher told CBS. “He would tell me I was going to feel a pop and that that would put my hips back and help my back pain.

“It happened all the way to the Olympics in Sydney, ’til I was 18.”

Antolin said she only realized last year what she thought was treatment had been abuse.

“It was like a light bulb went off,” Antolin said. “I trusted this man. Just knowing how vulnerable I was as a kid, to not know something like that would be inappropriate, just ruined me.”

John Manly — a California attorney representing more than 40 women in a lawsuit against USA Gymnastics for failing to protect his clients — says Nassar may have abused hundreds of girls over more than two decades, many at the ranch training headquarters of famed US coaches Bela and Marta Karolyi.

“I believe, at the end of the day, there are members of every single Olympic team since 1996 he did this to,” Manly said.

“This is somebody who is a serial predator. But the story here is that no one was watching to protect these girls, and they (USA Gymnastics and the Karolyis) put medals and money first.”

Nassar, 53, was arrested last November on charges of sexually assaulting a child in Michigan, where he is being held without bail. In December he was indicted on federal child pornography possession charges.

Nassar, who treated elite US gymnasts as Olympic team physician from 1996 to 2015, is accused by former athletes of inserting ungloved fingers into their anuses and vaginas and fondling their breasts.

Nassar has denied the charges, saying he conducted only legitimate medical procedures.