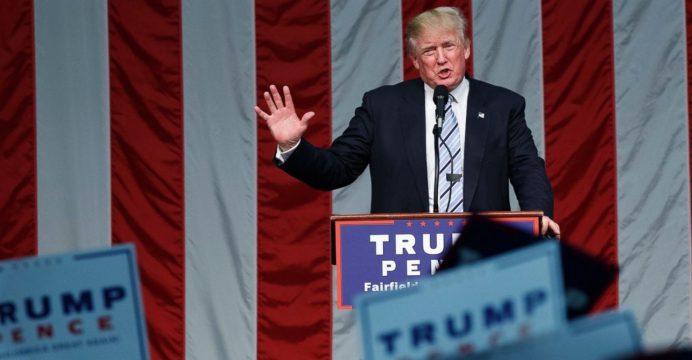 After four weeks at the White House, Donald Trump was back in familiar territory.

“I wanna be among my friends and among the people,” the President announced at his first campaign-style rally since taking office.

He listed off the executive orders he had already signed and re-iterated campaign-style pledges, such as fighting Isis and investing in infrastructure.

As per the formula, he started off by attacking the media, which he said had become “part of the problem” and “part of the corrupt system”.

“Many of our greatest Presidents fought with the media and called them out on their lies,” he said. “When the media lies to the people I will never let them get away with it.”

The new President has signed more executive actions, within two weeks of office, than any of his predecessors since Franklin Roosevelt. They include building the Dakota Access pipeline, investing authority in the police, ordering the construction of the border wall and building up the military.

At the event, he promised clean coal, that the miners would go back to work, and announced that an Obamacare replacement plan would be ready “in a few weeks”.

“The White House is running so smoothly,” he said. “So smoothly. Believe me, I and we inherited one big mess.”

He praised Department of Homeland Security secretary John Kelly, who wrote a draft 11-page memo which proposed using the National Guard to round up undocumented immigrants.

“For the most part, get them [immigrant criminals] the hell out of here and get them back to where they came from,” he said.

Mr Trump tried to ban travellers from seven Muslim-majority countries but it was blocked by a federal court in early February. Rather red-faced and sweaty by this point on the stage, Mr Trump took out a sheet of paper and read out the ban’s statute to the crowds, again insisting even a “bad high school student could understand it”.

He promised further action next week.