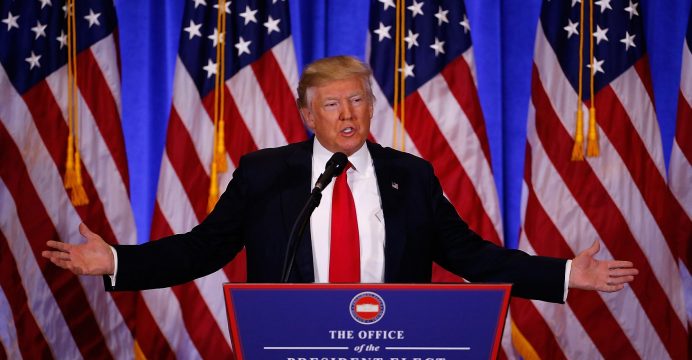 A crisis over the relationship between President Donald Trump’s aides and Russia deepened on Wednesday as a growing number of Trump’s fellow Republicans demanded expanded congressional inquiries into the matter.

Trump sought to focus attention on what he called criminal intelligence leaks about his ousted national security adviser, Michael Flynn.

Trump forced Flynn out on Monday after disclosures he had discussed U.S. sanctions on Russia with the Russian ambassador to the United States before Trump took office, and that he later misled Vice President Mike Pence about the conversations.

The drama of Flynn’s departure was the latest in a series of White House missteps and controversies since the Republican president was sworn in on Jan. 20.

At a news conference with Israeli Prime Minister Benjamin Netanyahu on Wednesday, Trump said Flynn, a retired U.S. Army lieutenant general, was a “wonderful man” who had been mistreated by the news media.

But Republican Trump critics including Senators John McCain and Lindsey Graham voiced fresh consternation. Adding to the pressure were comments by Senate Foreign Relations Committee Chairman Bob Corker, who has been a Trump supporter.

Corker said the Russia issue was threatening Trump’s agenda on foreign affairs and domestic matters like healthcare and tax policy. He questioned whether the White House was able to stabilize itself and said Flynn should testify before Congress.

“Let’s get everything out as quickly as possible on this Russia issue,” Corker told MSNBC’s “Morning Joe” program. “Maybe there’s a problem that obviously goes much deeper than what we now suspect.”

Democrats, doubting Trump’s Justice Department or the Republican-led Congress will pursue the matter vigorously, have demanded an independent investigation of possible illegal communications between Flynn and the Russian government and any efforts by Flynn or other White House officials to conceal wrongdoing.