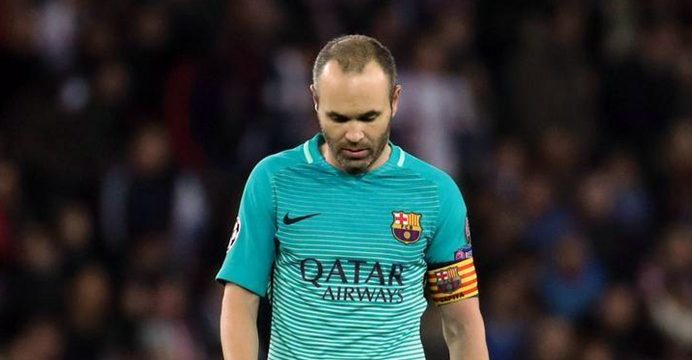 Looking to at least pull level with leaders Real Madrid in the Spanish title race, defending champions Barca must get over the shock of a 4-0 defeat in the first leg of their last-16 game in France.

“We have to get up, dust ourselves off and in the meantime not forget about the other competition that we’re in,” Iniesta told his club’s website.

Barca are in the King’s Cup final against Deportivo Alaves, the side they hammered 6-0 in La Liga last week, and they are just a point adrift of Real, who host Espanyol on Saturday.

However, Real have two games in hand and they are also in a better frame of mind after a 3-1 win over Napoli in the opening leg of their Champions League tie in Madrid on Wednesday.

Every point in La Liga will be valuable for Barcelona, who will be without suspended midfielder Sergio Busquets.

Barca crashed in spectacular fashion at PSG, a result that has put them in danger of being knocked out of the Champions League at the last-16 stage for the first time since 2007.

“There’s half the tie to go and I won’t lose hope, even though it will take a heroic comeback,” Luis Enrique told reporters.

Leganes, winless since Nov. 21, are just one place, and two points, clear of the relegation zone.

European champions Real go up against an Espanyol side who won three in a row before Sunday’s home defeat to Real Sociedad.

French forward Karim Benzema has an extra bounce in his step after ending his month-long goal drought when he ignited Real’s comeback against Napoli with his fifth goal of the competition this season.

“We’re all very happy because we put in a good performance and we’re now looking to continue in this vein in La Liga,” Benzema told his club’s website.

Real coach Zinedine Zidane could include Gareth Bale in the squad after the Welsh forward recovered from an ankle injury sustained in November.

On Saturday, third-place Sevilla host Eibar while Atletico, who are fourth, play at Sporting Gijon.