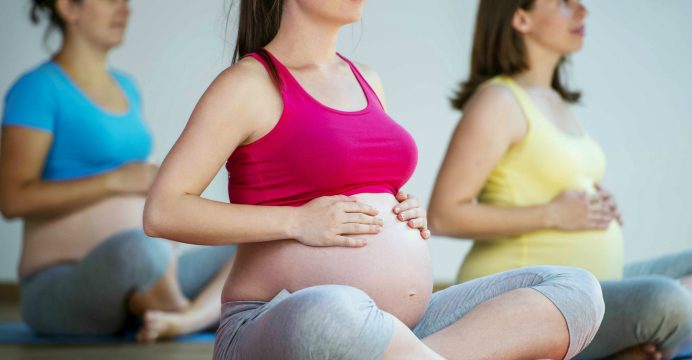 Exercise may be an efficient way for obese pregnant women to lower their risk of diabetes, dangerously high blood pressure and other complications, research suggests.

“The study suggests that a prenatal exercise-based intervention leads to both decreased costs and improved outcomes in obese women,” said Leah Savitsky, a medical student at Oregon Health and Science University in Portland who led the study.

As reported at the 37th annual meeting of the Society for Maternal-Fetal Medicine in San Diego, California, Savitsky and her team analyzed previously published research on the effect of exercise on pregnant women with a body mass index (BMI) of at least 30, reports Reuters.

The normal range for BMI – a ratio of weight to height – is 18.5 to 24.9; a BMI of 30 or more indicates obesity. Based on their analyses of those earlier studies, the researchers estimated the benefit of exercise for women who are obese at the start of their pregnancy.

They calculated that for every one million such women, there would be 38,176 cases of a dangerous pregnancy-related blood pressure problem known as preeclampsia among those who exercised, compared to 113,000 cases among those who didn’t exercise.

Exercise would also be linked to a decrease in so-called gestational diabetes, with a rate of 195,520 per million among exercisers compared to 305,500 among non-exercisers, according to their calculations.

Based on a cost-effectiveness threshold of $100,000 per quality-adjusted life year, an exercise intervention could save money as long as expenses are held to just under $3,000. The effects of exercise may be even more beneficial than the study suggests, Savitsky said.

“This study did not consider additional downstream benefits on control of weight beyond pregnancy as well as the downstream potential benefits on hypertension and diabetes,” she told Reuters Health by email.

Women who are not obese may benefit as well. The researchers applied their model to women with a normal BMI of 18.5 – 24.9 and found similar improvements in outcomes among those who exercise, although the cost-effectiveness thresholds were lower.

One trial that the study drew from looked at 765 women randomized to an exercise group or a control group.

“With the obesity epidemic looming in our society, perhaps we should be turning our attention to prevention of disease. It does not seem to be too late even for obese pregnant women to engage in lifestyle change that may substantially reduce health care costs,” Mottola told Reuters Health by email.

The current study was not designed to develop specific exercise guidelines for obese pregnant women; these women should consult their obstetricians for guidance. In the meantime, the American College of Obstetricians and Gynecologists advises obese pregnant women to “start with low-intensity, short periods of exercise and gradually increase as able.”