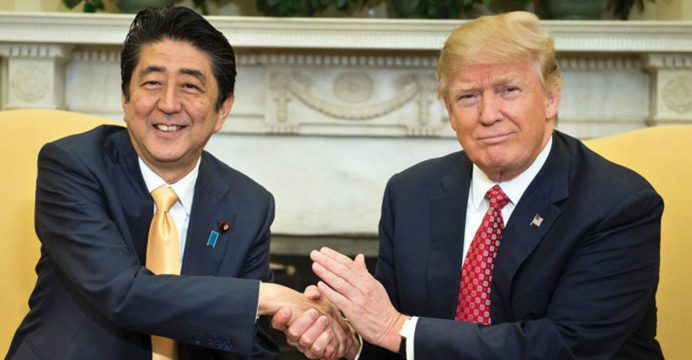 Trump and Abe retreat to Florida for golf course diplomacy

After reportedly hitting it off in the Oval Office President Donald Trump and his Japanese counterpart Shinzo Abe flew south to tee off on the golf course, meeting Saturday in Florida to discuss US-Asia engagement.

As part of a two-day visit that began in Washington, Abe and Trump jetted to the US president’s Mar-a-Lago estate together on Friday aboard Air Force One for more diplomatic talks and a round of golf at the “Trump International Golf Club” in West Palm Beach, reports BSS.

The temperamental US president was on the charm offensive Friday when he greeted the Japanese leader with an affectionate hug, dropping his previous harsh rhetoric towards Tokyo and ensuring America’s commitment to Japan’s security.

Abe, who has emphasized that his golf skills are not on par with the billionaire Republican’s, welcomed the opportunity to “take time to talk with Donald about the future of the world and the future of the region.”

The Japanese prime minister has spent more time with Trump than any foreign leader since the real estate mogul’s election, as world powers grapple with how to engage with the mercurial American president who conducts some of his diplomacy via Twitter.

Abe’s work-and-play date with Trump evokes a similar outing made by the Japanese leader’s grandfather, former prime minister Nobusuke Kishi, who more than half-a-century ago sported a polo and hit the links with former US president Dwight Eisenhower.