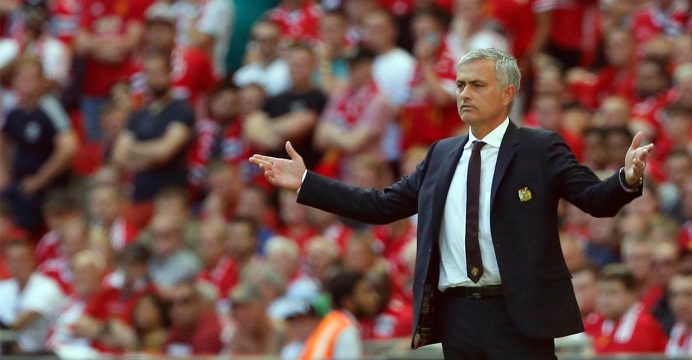 Manchester United manager Jose Mourinho claims his side’s attacking efforts would be hailed more if someone else was in charge at Old Trafford.

United completely outplayed Watford in Saturday’s 2-0 Premier League win as goals from Juan Mata and Anthony Martial took Mourinho’s men to within a point of the Champions League places.

Their display belied Mourinho’s reputation as a defence-minded manager and he said United would get more credit for the quality of their football if he was not sitting in the dug-out.

“It was a very good (performance),” he said. “It was the kind of football that if it was somebody else’s team, you would say it was ‘art’, but because it was my team, you will just say it was ‘very good’. But that is fine.”

Mata’s 32nd-minute goal helped United break through Watford’s defensive resistance on an afternoon when Mourinho’s men had the run of the pitch.

Watford goalkeeper Heurelho Gomes was the busiest man in the stadium and after initially keeping United at bay, he could do nothing as Mata slid home Martial’s cross from just three yards out.

Martial had been one of those running Watford ragged and when he made it 2-0 on the hour, the game was well and truly over.

It was United’s fourth consecutive clean sheet and while that pleased Mourinho, he knows the club’s fans demand to be entertained more than anything else.

“We are not a team scoring lots of goals so it is important to keep the clean sheets,” Mourinho told his post-game press conference. “I am really happy with the performance.

“When I got the job they were saying at Manchester United you need to play football in a certain way and I agree.

“Sixteen (league) games unbeaten is an amazing record, but it would be the perfect record with two or three fewer draws at home. We have an amazing record of being unbeaten, but we should have more.”