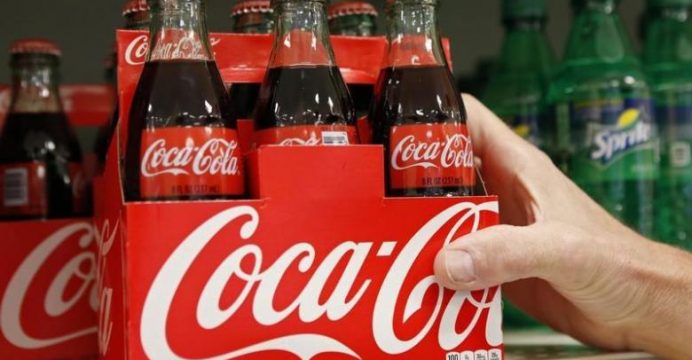 Coca-Cola Co forecast a surprise drop in full-year profit as costs related to re-franchising its U.S. bottling operations are expected to be higher than previously anticipated. The world’s largest beverage maker’s shares fell 3.1 percent to $40.73 in morning trading on Thursday.

Coca-Cola has been offloading much of its low-margin bottling business to cope with falling demand for carbonated beverages in North America, reports Reuters.

It has also been stepping up efforts to reduce sugar in its beverages, amid growing pressure from health experts and governments who have blamed sugary drinks for a rise in obesity.

Coca-cola soda is shown on display during a preview of a new Walmart Super Center prior to its opening in Compton, California

Costs related to the re-franchising of Coca-Cola’s U.S. bottling operations look to be a more meaningful drag on the company’s full-year profit than analysts were expecting, brokerage Cowen & Co said in a note to clients.

The quarter included a $919 million charge related to the re-franchising of its bottling operations. Excluding items, the company earned 37 cents per share, in line with estimates.

Net operating revenue fell about 6 percent to $9.41 billion, the seventh straight drop, but beat estimates of $9.13 billion, helped by higher sales of its sodas in North America, its biggest market.

Volume sales rose 1 percent in North America, including a 1 percent growth in sales of its carbonated sodas such as Sprite and Fanta.

However, global volume sales for the company fell 1 percent in the fourth quarter, hurt by high levels of inflation in certain Latin American countries.