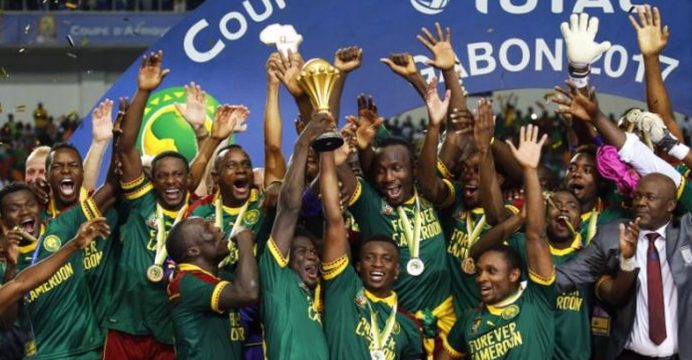 Vincent Aboubakar scored a brilliant late goal to hand unfancied Cameroon a 2-1 come-from-behind victory over Egypt and their fifth African Nations Cup title in an entertaining final on Sunday.

Cameroon, who had eight of their players withdraw before the tournament, came from a goal down after midfielder Mohamed Elneny had put Egypt ahead midway through the first half.

Nicolas Nkoulou equalised on the hour and, as Egypt tired, Cameroon appeared to find a new gear, creating several chances before Aboubakar struck the winner in the 88th minute after chesting the ball down and flicking it over defender Ali Gabr.

It was Cameroon’s first title since 2002 and denied Egypt a triumphant return to the tournament they last won in 2010, while at the same time inflicting a first loss on the North African side in 25 Nations Cup matches dating back to 2004.

“We are delighted but we are not yet the finished product. We can still make a lot of improvement,” said Cameroon’s delighted Belgian manager Hugo Broos.

Egypt dominated the early possession and had the lead after 22 minutes as Cameroon’s defence stood far too static.

Elneny collected the ball in space on the right-hand side of the area and, with the defence and goalkeeper Fabrice Ondoa expecting him to square the ball into the six-yard box, the midfielder rifled his shot into the roof of the net.