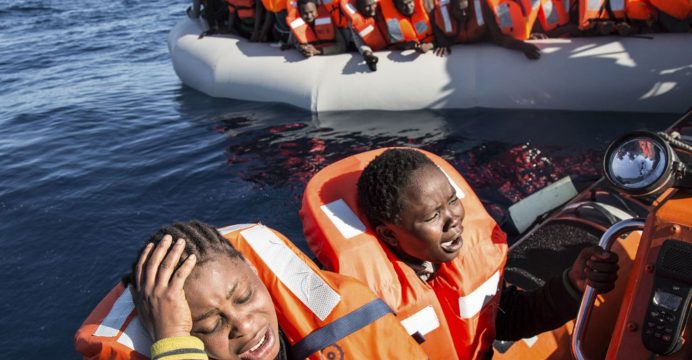 Libyans intercept at least 1,131 migrants off western coast in a week

Libya’s coast guard intercepted at least 1,131 migrants near the western city of Sabratha over the course of a week, a spokesman said on Saturday.

Ayoub Qassem said 431 migrants had been intercepted on four inflatable boats off Sabratha’s coast on Thursday and some 700 had been picked up on Jan. 27 from three wooden vessels in the same area.

“The illegal migrants are from various sub-Saharan countries and include a big number of women and children,” Qassem said of those intercepted on Thursday, reports Reuters.

Those intercepted on Jan. 27 also included migrants from Syria, Tunisia, Libya and the Palestinian territories, he said, and smugglers had attempted to block the coast guards from taking those migrants from their boats.

“Smugglers had tried to foil the process of arrest by opening fire on our coast guards but the coast guards fired back and that forced the smugglers to withdraw.”

Libya has become the main point of departure for migrants trying to cross the Mediterranean by boat to Europe since a route between Turkey and Greece was largely closed off last year.

People smugglers generally operate with impunity, launching migrants in flimsy vessels that sometimes break down or sink before they are spotted by rescue boats operated by an EU naval mission and by non-government organizations. More than 4,500 died attempting the crossing last year.

Libya’s coastguard sends migrants back to detention centers that rights groups have criticized for their inhumane conditions and widespread abuses.