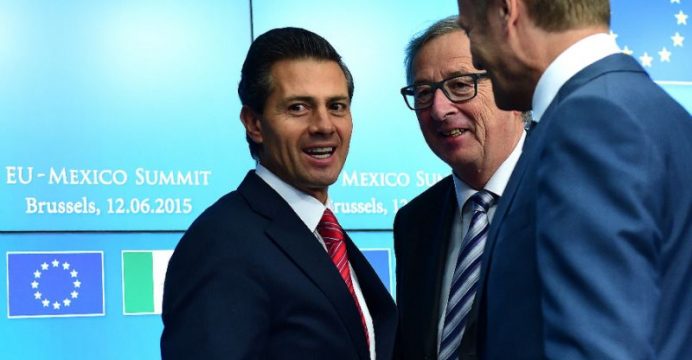 Facing US President Donald Trump’s protectionist threats, Mexico is looking to expand trade ties with Europe and Asia, but reducing its dependence on the massive US market will be tough.

Mexico and the European Union agreed on Wednesday to speed up negotiations to modernize an existing free trade pact in which 53 billion euros ($57 billion) in goods were exchanged in 2015, reports BSS.

At the same time, the government said it planned to negotiate a free trade agreement with Britain once the island exits the EU.

“It’s good for Mexico to turn toward other places, but I wouldn’t declare NAFTA dead,” said Gabriela Siller, director of economic analysis at the Mexican financial group BASE.

On Wednesday, the government launched a 90-day period of consultations with the private sector to prepare its strategy for negotiations with the United States and Canada, which are expected to start in May.

The negotiations promise to be rough. While Trump said he was willing to renegotiate rather than scrap NAFTA, he called the deal a “catastrophe” for the United States.

For his part, Mexican President Enrique Pena Nieto promised at a meeting of agricultural industry leaders that he would steadfastly defend the interests of Mexicans during the negotiations.

LOOK TO THE EAST

With NAFTA under threat, China appears as an attractive alternative with its massive market of 1.37 billion people. On Wednesday, the government unveiled a $212 million joint investment between Chinese automaker JAC Motors and Mexico’s Giant Motors to build SUVs in the central state of Hidalgo for the domestic market and exports to Latin America.

The JAC deal comes as Trump has threatened to impose stiff tariffs on car companies that ships US jobs to Mexico. Ford Motors decided last month to cancel a $1.6 billion new factory project in northern Mexico. Though the company said it was simply a business decision, many in Mexico saw it as a consequence of Trump’s threats.

“When you can’t look only to the north, you can look to the east,” said Hidalgo’s governor, Omar Fayad.

Even though the two countries do not have a free trade pact, China is Mexico’s second biggest trade partner, with $75 billion in goods exchanged in 2015.

But the trade balance is unfavorable to Mexico, which imports 14 times more from China than it exports to the Asian country.

“If this was a football game, they outscore us badly,” said Enrique Dussel, coordinator of the China-Mexico Studies Center at the National Autonomous University of Mexico.

Dussel said he was “skeptical and cautious” about the idea of Mexico turning to China to diversify its foreign investments and trade.

The situation has been “extremely tense,” with failed investments and disputes at the World Trade Organization-related to the textile, steel and toy industries.

Pena Nieto has visited China several times since taking office in 2012, while a strategic partnership was signed during Chinese President Xi Jinping’s visit to Mexico in 2013.

But “neither country has figured out how to fulfill this” partnership, Dussel said. “China requires dedication, understanding.”

But even taken together, China and Europe are modest partners compared to the United States. Two-way trade between Mexico and the United States totals around half a trillion dollars per year, four times more than the Latin American nation’s combined business with China and the EU.

Some 80 percent of Mexico’s exports go to its northern neighbor, and many of those goods are made with parts from the United States, highlighting how much the two nations’ industries are intertwined.

For Manuel Molano, deputy director of the Mexican Institute of Competitiveness think tank, Mexico could find suppliers in Germany, Japan and China if necessary.

The problem, he said, is if Trump fulfills his threat to impose tariffs on Mexican-made goods while the two countries tussle at the World Trade Organization.