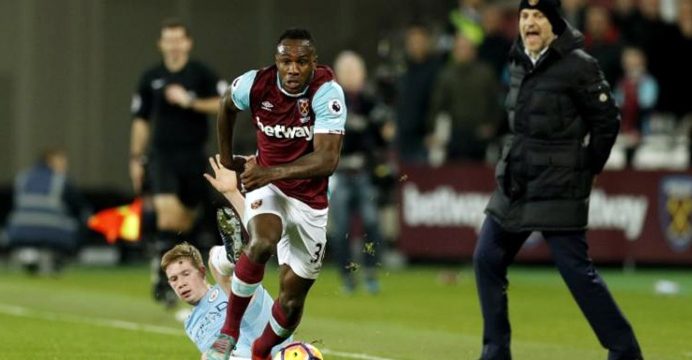 Clinical finishing was in short supply at Old Trafford, however, where United came up against an inspired performance from Hull keeper Eldin Jakupovic, who made a string of superb saves to keep Jose Mourinho’s side at bay.

While City’s victory moved them level on 46 points with fourth-placed Liverpool and kept leaders Chelsea just about in their sights, United’s slip-up left them sixth, four points adrift of City and 14 off the summit.

Hull’s unlikely point moved them off the foot of the table while Stoke City and Everton drew 1-1.

It has not been plain sailing for City manager Pep Guardiola in recent months and he came into Wednesday’s game facing the prospect of losing three successive top-flight away matches for the first time in his managerial career.

City had already beaten West Ham twice this season with an aggregate score of 8-1 and they were returning to the London Stadium less than a month after thrashing their hosts 5-0 in the FA Cup third round.

De Bruyne started and finished off a swift counter to put them ahead after 17 minutes and with the home side in disarray, City turned the screw.

Sane gave Silva a tap-in at the far post four minutes later, before Jesus grabbed his first for the club.

City’s January signing side-footed in Raheem Sterling’s pass six minutes before the break and when Sterling was felled by Jose Fonte, making his West Ham debut, Toure stepped up to thump his penalty into the net.