Apple on Tuesday reported a rebound in iPhone sales to lift the tech giant to record revenue in the past quarter in quarterly results that eased concerns about slowing growth. The results showed strong demand for Apple’s iPhone 7 models launched last year, with demand outpacing supply.

Revenue climbed to an all-time record $78.4 billion compared to $75.9 billion in the same period a year earlier, the company said in its earnings update for the quarter ending in December. Compared with the same quarter a year earlier, profit dipped 2.6 percent to $17.9 billion, reports BSS.

Apple shares were up nearly three percent to $124.80 in after-market trades that followed the release of the earnings results. 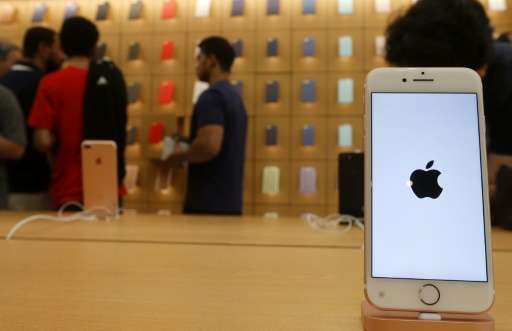 Apple said that it sold 78.3 million iPhones — the most ever in a quarter — up five percent from the same prime holiday shopping period the prior year.

The sales made Apple the world’s top smartphone vendor in the final three months of last year, overtaking Samsung, according to industry tracker Strategy Analytics.

The growth promised to assuage concerns by investors that iPhone sales, which account for the bulk of Apple’s revenue, were softening due to three-quarters of sequential decline.

The amount of money taken in from online services and digital content grew strongly, led by unprecedented buying at Apple’s online App Store, according to Cook.

“I have not yet done the numbers, but I think Apple had the best quarter in the history of humanity,” Asymco analyst Horace Dediu said in a comment fired off on Twitter.

Apple, however, saw revenue in its important China market drop 12 percent to $16.2 billion, according to the earnings report.

The company’s performance in China improved from the previous quarter and but was hampered by a strong US dollar, according to Apple.

Cook said he was encouraged, though Apple still faces challenges in mainland China. Apple also intends to “invest significantly” in India, he told analysts during an earning call. – iPhone 7 ‘a success’ –

“The iPhone 7 will be a much steadier contributor and we would argue that the new model has been a success,” Saunders said in a note to clients.

“It is clear that Apple did enough to stimulate interest and persuade many consumers to upgrade.”

But Saunders said that Apple “competitors, including Google and Amazon, are still nipping at its heels with new products and ideas — so it needs to speed up, even if it is just to stand still.” Some analysts say Apple remains too dependent on the iPhone and that it needs to better diversify revenue amid a sputtering smartphone market and intense competition.

The success of the iPhone sets the stage for Apple to be at the heart of smartphone lifestyles in which people synch with homes, security systems, cars, health care and more with mobile devices. It also puts Apple in a position to make money from digital content, services, or online commerce.

“Our ecosystem is broadening to more and more of the areas where people spend their time: at the gym, on the go, in the home, and on the job,” Cook said.

Apple said services revenue grew 18 percent from a year ago to $7.2 billion, while “other” products including the Apple Watch, brought in $4 billion.

“Apple’s dependence on sales of hardware to drive revenue is a future pitfall for the company,” said Colin Gillis of BGC Financial.

In response to an analyst query, Cook said that he was “optimistic” about the potential for tax reform that could entice Apple into repatriating some of the more than $200 billion in profit it keeps outside the US.

Cook said such a scenario would be good for Apple and the country, but declined to expand on how the company might spend the money.