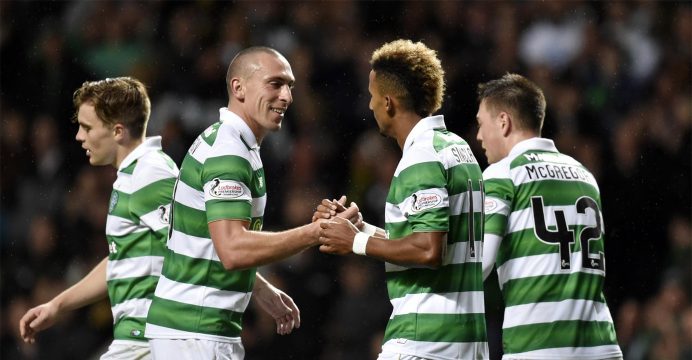 Scott Sinclair scored twice as Celtic surpassed a 50-year-old club record in style with a 4-0 thrashing of Hearts on Sunday to extend their unbeaten domestic run to 27 matches.

Callum McGregor, only playing due to an injury to Stuart Armstrong in the warm-up, opened the scoring in the first half before late goals from Sinclair and Patrick Roberts made things comfortable for the Scottish champions.

A stoppage-time penalty from Sinclair sealed a 17th league victory in a row as the Hoops eclipsed the record set in Celtic’s greatest ever season — the ‘Lisbon Lions’ 1966-67 campaign, which ended with a clean sweep of trophies including the European Cup.

The win moves Brendan Rodgers’ side, who have already won the League Cup, 22 points clear of Rangers at the top of the table as they remain firmly on course for a domestic treble.

Celtic, already having to cope with injuries to strikers Moussa Dembele and Leigh Griffiths, were dealt a further blow just prior to kick-off when midfielder Armstrong hobbled out of the warm-up.

However, his replacement made the most of his opportunity as he fired Celtic in front in the 30th minute. Sinclair, playing through the middle in the absence of Dembele and Griffiths, cut the Hearts defence open with a precision pass to the feet of McGregor who prodded the ball in off the inside of the post.

Hearts didn’t pose any real threat until just before the break when Jamie Walker sent a looping header on to the roof of the net from Malaury Martin’s free-kick.

Celtic upped the tempo in the second half and James Forrest should have increased their advantage in the 50th minute. The winger latched on to a hopeful through ball to race into the box but delayed his shot allowing Liam Smith to divert it out for a corner with a superb last-ditch sliding tackle.

Moments later the home side were appealing for a penalty when Sinclair’s cross appeared to hit the arm of John Souttar but referee Bobby Madden ignored their pleas.

Celtic came close with a curling effort from Roberts that went inches wide before Martin was presented with a rare chance to equalise but Craig Gordon was equal to his effort.

Despite that blip, the Hoops remained in complete control and grabbed a deserved second goal in the 78th minute. Kieran Tierney’s dangerous low delivery in the box was stopped on the line by Jack Hamilton after being diverted towards his own goal by Aaron Hughes, but Sinclair was quickest to react and force the ball over the line.

Tierney was again the provider two minutes later as he cut the ball back for Roberts who took a touch before lashing the ball high into the roof of the net.

Sinclair then expertly despatched a penalty in the first minute of injury time to seal the win after substitute Jack Aitchison was tripped by Leonard Sowah.