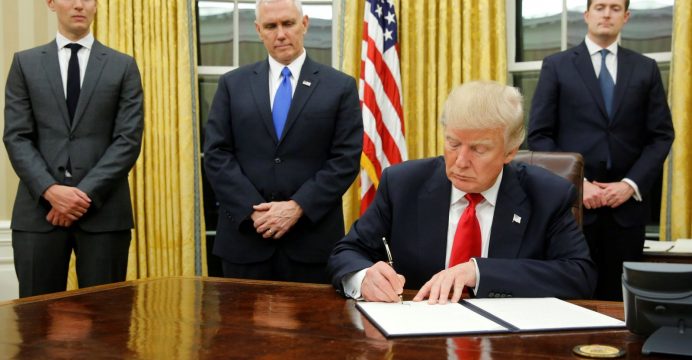 Trump moves ahead with wall, puts stamp on U.S. immigration

A draft executive order seen by Reuters that Trump is expected to sign in the coming days would block the entry of refugees from war-torn Syria and suspend the entry of any immigrants from Muslim-majority Middle Eastern and African countries Syria, Sudan, Somalia, Iraq, Iran, Libya and Yemen while permanent rules are studied , reports Reuters.

Less than a week into his presidency, Trump has moved aggressively to put his stamp on a range of policies, including steps to gut the healthcare system devised by his predecessor, and make clear that as president he is not turning toward more moderate positions than he took as a candidate.

His directives on Wednesday signaled a tough action toward the roughly 11 million illegal immigrants already in the United States, most from Latin America, whom he already has threatened to deport.

In a move critics called a slight to the integrity of American democracy, Trump also said on Wednesday he would seek a “major investigation” into what he believes was voter fraud in the November election, despite overwhelming consensus among state officials, election experts and politicians that it is rare in the United States.

“We are going to restore the rule of law in the United States,” Trump told an audience that included relatives of people killed by illegal immigrants at the Department of Homeland Security after signing two executive orders.

The directives ordered the construction of a multibillion-dollar wall along the roughly 2,000-mile (3,200-km) U.S.-Mexico border, moved to strip federal funding from “sanctuary” states and cities that harbor illegal immigrants, and expanded the force of American immigration agents.

His plans prompted an outcry from immigrant advocates and Democratic lawmakers who said Trump was jeopardizing the rights and freedoms of millions of people while treating Mexico as an enemy, not an ally, and soiling America’s historic reputation as a welcoming place for immigrants of all stripes.

“The border wall is about political theater at the expense of civil liberties,” said Christian Ramirez, director of the Southern Border Communities Coalition immigrant advocacy group.

“It is not national security policy. Border communities are among the safest in the nation, and patrolling them with tens of thousands of heavily armed, poorly trained, unaccountable agents puts lives at risks. This will turn these communities into de facto military zones,” Ramirez said.

The White House said the wall would stem the flow of drugs, crime and illegal immigration into the United States.

“We are in the middle of a crisis on our southern border: The unprecedented surge of illegal migrants from Central America is harming both Mexico and the United States,” Trump said, adding: “A nation without borders is not a nation.”

The immigration crackdown has sparked fear among so-called “dreamers,” whose parents brought them to the United States illegally and who received temporary deportation relief and work permits from President Barack Obama.