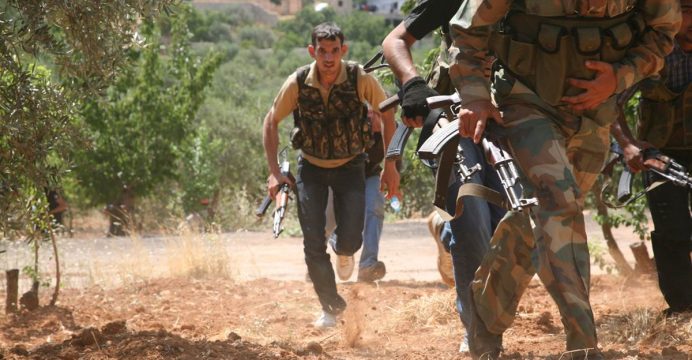 Syrian Islamist rebel group Ahrar al-Sham said on Thursday six other rebel factions had joined its ranks in northwestern Syria in order to fend off a major assault by a powerful jihadist group.

The hardline Jabhat Fateh al-Sham, once allied with al Qaeda and formerly known as the Nusra Front, attacked Free Syrian Army (FSA) groups west of Aleppo this week, accusing them of conspiring against it at peace talks in Kazakhstan this week.

Ahrar al-Sham, which presents itself as a mainstream Sunni Islamist group, sided with the FSA groups and said Fateh al-Sham had rejected mediation attempts. The Ahrar statement said that any attack on its members of was tantamount to a “declaration of war”, and it would not hesitate to confront it, reports Reuters.

The Ahrar al-Sham statement also mentioned a sixth group, the Sham Revolutionary Brigades, and “other brigades” had joined alongside these five.

Ahrar al-Sham is considered a terrorist group by Moscow and did not attend the Russian-backed Astana peace talks. But it said it would support FSA factions that took part if they secured a favorable outcome for the opposition.

The attack by Fateh al-Sham had threatened to wipe out the FSA groups which have also received backing from countries opposed to Syrian President Bashar al-Assad such as Gulf Arab states, Turkey and the United States.

Internationally viewed as a terrorist group, Fateh al-Sham has been excluded from all diplomatic efforts to end the Syrian conflict, including the recent truce brokered by Russia and Turkey. Since the new year, the group has been targeted by a spate of U.S. air strikes.