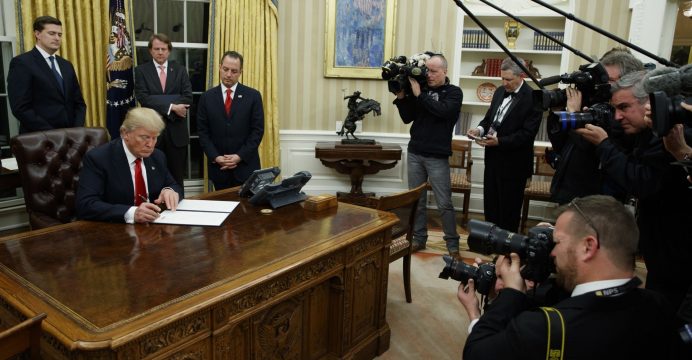 Just days ahead of Trump taking office, a self-assured Xi was in Switzerland as the keynote speaker at the World Economic Forum in Davos, offering a vigorous defense of globalization and signaling Beijing’s desire to play a bigger role on the world stage , reports Reuters.

Even on the thorny issue of the South China Sea, Beijing did not rise to the bait of White House remarks this week about “defending international territories” in the disputed waterway. Instead, China stressed its desire for peace and issued a restrained call for Washington to watch what it says.

“You have your ‘America first’, we have our ‘community of common destiny for mankind’,” Retired Major-General Luo Yuan, a widely read Chinese military figure best known for his normally hawkish tone, wrote on his blog this week.

“You have a ‘closed country’, we have ‘one belt, one road’,” he added, referring to China’s multi-billion dollar new Silk Road trade and investment program.

And while China has repeatedly said it does not want the traditional U.S. role of world leadership, a senior Chinese diplomat accepted this week it could be forced upon China.

“If anyone were to say China is playing a leadership role in the world I would say it’s not China rushing to the front but rather the front runners have stepped back leaving the place to China,” said Zhang Jun, director general of the Chinese Foreign Ministry’s international economics department.