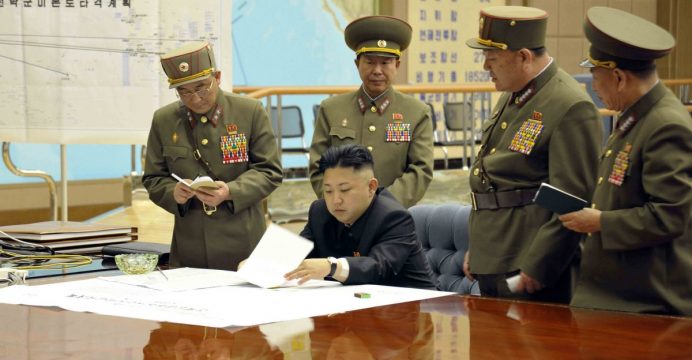 It is a scene unlikely ever to become reality – American president Donald Trump and North Korean leader Kim Jong Un hugging and leaning in for a kiss on the bustling streets of Hong Kong.

The lookalikes of the controversial leaders turned heads and prompted many giggles as they paraded down a busy shopping district to promote a Lunar New Year song on Wednesday.

“Die, America, die,” shouted the Kim lookalike, a Hong Kong-based Australian musician who gave only his first name, Howard, as he swaggered in the young leader’s trademark black uniform.

His counterpart playing Trump, a 66-year-old American musician who goes by the name of Dennis Alan, pouted and took the insults in stride, reports Reuters.

Alan needed three times as much time as Howard to prepare for his appearance, taking 1-1/2 hours to spread layer after layer of orange foundation on his face and getting a hair stylist to delicately affix his tailor-made wig.

Tongue-in-cheek, the Kim impersonator praised the newly inaugurated leader of the free world, saying the two nations could finally be friends as both are now led by “dictators”.

“I think he’s a great leader and he’s much like me, a dictator,” said Howard. “And I think with that in mind he’s going to turn the United States into North Korea 2.0. So we’re going to be great friends.”

On New Year’s Day, the North Korean leader said his country was close to test-launching an intercontinental ballistic missile, which suggested the United States could be in range.