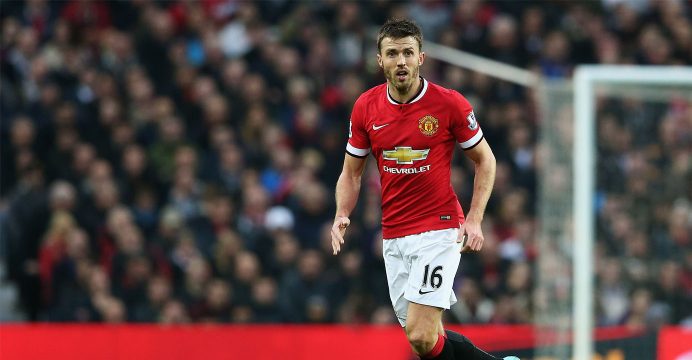 Carrick says Man Utd will go for it at Hull

Michael Carrick has pledged that Manchester United will not rest on their laurels when they travel to Hull City looking to close out victory in their League Cup semi-final.

United won 2-0 in the first leg at Old Trafford courtesy of second-half strikes from Juan Mata and Marouane Fellaini, putting them within reach of a final showdown with either Liverpool or Southampton.

But Hull have shown signs of improvement under new manager Marco Silva,giving Premier League leaders Chelsea a decent game in Sunday’s 2-0 defeat at Stamford Bridge, and Carrick says United will take no chances.

“It’s definitely not over, we all know that,” the 35-year-old midfielder told MUTV.

“We are telling ourselves that. I think we’ll be pretty much full-strength and will approach the game like it’s a 0-0 and starting from scratch.

“It’s dangerous when you go in there defending a lead to tell yourself this result will do or that result will do, or we can afford to do this or that.

“We need to approach it like any other game, keep our focus and intensity and try to win the game.”

After a run of nine successive wins in all competitions, United’s advance towards the Champions League places has been held up by 1-1 draws against Liverpool and Stoke City.

It means they remain sixth in the league table, four points off the top four, but Carrick feels a Wembley final appearance will show Jose Mourinho’s men are on the right track.

“Going to Wembley, winning a trophy, how can you not like that?” said Carrick, whose side last reached a League Cup final in 2010, when they beat Aston Villa 2-1 to claim the trophy for a fourth time.

“Especially when we feel we are as close as we are to getting there, without taking anything for granted.

“That’s what you play for and that’s what the fans want to watch. They want to go and celebrate victories and win things, lift trophies, have a good day out and enjoy it.”