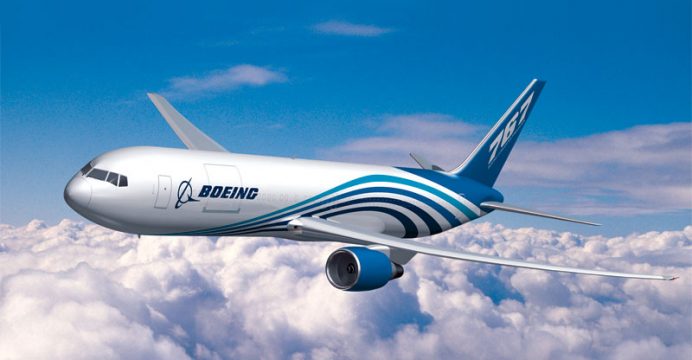 Boeing expects to deliver more planes and higher earnings in 2017

Boeing Co beat analysts’ profit estimates on Wednesday despite another charge for its military tanker aircraft and said it expects to deliver more planes and higher earnings in 2017, though revenue likely will fall, reports Reuters.

The world’s biggest plane maker also said it expects to deliver between 760 and 765 commercial aircraft in 2017, topping 748 deliveries in 2016.

Boeing Co’s logo is seen above the front doors of its largest jetliner factory in Everett, Washington

The company generated $7.7 billion in operating cash flow at the end of the third quarter, fueling expectations it would hit its target of about $10 billion for 2016. But the year-end figure surpassed analysts’ estimates of $10.4 billion, according to Thomson Reuters I/B/E/S.

“We think this release is pretty boring – and boring is good,” Robert Stallard, an analyst at Vertical Research Partners, wrote in a note to clients.

Boeing shares were up 1.4 percent at $162.80 in premarket trading. Boeing’s higher cash target for 2017 suggested it can keep generating cash by reducing costs while it increases aircraft deliveries.

Boeing expects to deliver more planes in 2017 despite plans to cut output of its 777 model by 40 percent this year. Deliveries of its smaller 737 and 737 MAX models will make up the difference, producing a revenue decline in 2017.

Core earnings rose to $2.47 per share in the fourth quarter from $1.60 a year earlier. The increase came despite a $201 million aftertax charge for Boeing’s KC-46A aerial refueling tanker program for the U.S. Air Force.

Revenue fell 1.2 percent to $23.29 billion in the quarter. President Donald Trump has been meeting with corporate executives in an effort to cut better deals with defense contractors.

Boeing’s chief executive officer met with Trump earlier this month and said afterward that they had “made progress” on lowering the cost of the Air Force One presidential aircraft fleet and on a potential sale of Boeing fighter aircraft.