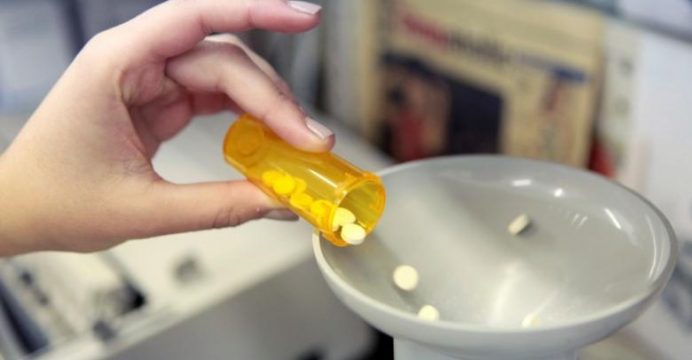 Canada to pursue unprecedented measures to curb the use of painkiller

As deaths from powerful painkillers continue to rise, Canada is pursuing unprecedented measures to curb their use, including requiring cigarette-style warning stickers on every prescription, Health Minister Jane Philpott told Reuters.

Next month Health Canada plans to publish a detailed proposal for the stickers, which Philpott said would warn that opioid painkillers can cause addiction and overdose. In March, an advisory panel is set to consider a second measure, revising the official label definition of how opioids should – and should not – be used, officials said.

Prescription painkiller oxycodone are shown at a pharmacy in Toronto, Ontario, Canada

Warning stickers would be a first and could serve as an example. The measures would follow other strategies that failed to stem addiction and death involving prescription opioids, such as OxyContin and Hydromorph Contin, as well as illicit ones, including heroin and powerful fentanyl smuggled from China.

Fatal overdoses have increased across Canada, mirroring the much larger epidemic in the United States. In Ontario, the most populous province, prescription opioid deaths rose 40 percent in six years; in the western province of Saskatchewan, they more than doubled since 2010. An influx of illicit variations of fentanyl fueled an 80 percent increase in deaths last year in British Columbia to a record 914.

Philpott has called the opioid epidemic the nation’s greatest public health crisis and pledged to use every tool at her disposal to fix it.

“We’re concerned when opioid prescriptions are on the increase,” she told Reuters. “We need to understand what’s behind that and make wise recommendations.”

Drug companies have said they support measures to increase patient safety. Several companies and industry groups declined to comment until the government lays the new proposals.

Some doctors and public health experts who have long clamored for safeguards said the new measures may be too little, too late.

Philpott envisions stickers similar to those pharmacists put on pill bottles reminding patients to take a medication with food. In addition to warning of the risks, she said, they would advise patients where to get more information and help if needed.

Rewriting label definitions of evidence-supported opioid use would change how drug companies sell opioids in Canada, an $881-million-a-year market.

Doctors are allowed to prescribe “off-label,” tailoring prescriptions to patients’ individual needs. But pharmaceutical companies must follow the labels’ language in all marketing, including advertisements and sales calls on physicians.

In an email, spokesman Grant Perry said OxyContin and Hydromorph Contin maker Purdue “supports providing the most relevant and up to date information” to doctors and patients, as well as evidence-based updates.

Spokeswoman Jennifer McCormack said in an email Janssen would “continue to work with Health Canada to help ensure the safe and appropriate use” of prescription opioids and it was “important to carefully balance anti-abuse efforts” with patient needs.

In an effort to address Canada’s drug problem, health officials made it more difficult to obtain OxyContin after Purdue introduced a tamper-resistant formulation of the drug in 2012. But physicians and addicts switched to different drugs.

Canadian and U.S. public health advocates have campaigned unsuccessfully to restrict the long-term use of any opioid for non-cancer pain.

“The best available evidence does not support their use for treatment of chronic pain,” said David Juurlink, an addiction specialist at Toronto’s Sunnybrook Health Sciences Center.

The U.S. Centers for Disease Control and Prevention released non-binding guidelines last year cautioning against the use of long-acting opioids as first-line treatment for chronic pain and urging low initial doses and discontinuation as soon as possible.

Supriya Sharma, Chief Medical Advisor at Health Canada, said it’s too soon to say whether the agency’s changes would be that sweeping.