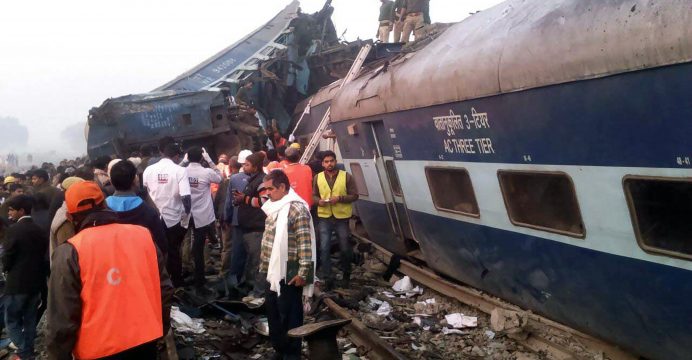 At least 39 people were killed and 50 injured on Saturday night when nine coaches of a passenger train derailed in eastern India in the latest disaster to hit the vast and accident-prone state railways, police said.

The Hirakhand express train from Jagdalpur to Bhubaneswar derailed at about 11:20 pm near Kuneri station, in the state of Andhra Pradesh, about 30 km (18 miles) from the town of Rayagada.

“The rescue operation is almost over,” said J.P. Mishra, the chief public relations officer at East Coast Railway, which has jurisdiction over the area where the derailment occurred, reports Reuters.

“Our first priority is to take care of the injured passengers and provide proper treatment by shifting them to hospitals. We are also searching all the coaches to ensure that nobody remains stranded in them.”

The reason for the derailment has not been ascertained, Mishra said, adding that they were not ruling out the possibility of foul play and investigations will be conducted. The area in which the incident occurred is one where Maoist rebels typically operate.