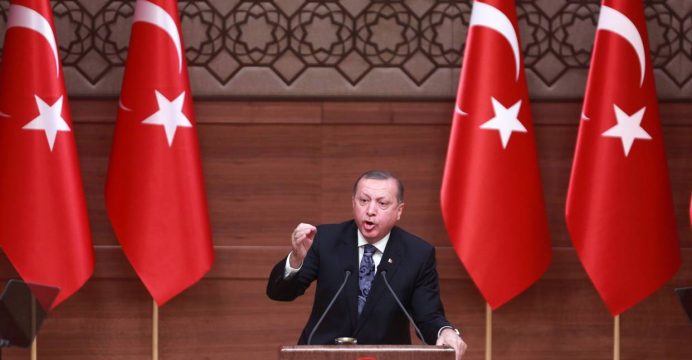 The Turkish parliament has backed a plan to strengthen the powers of the presidency, paving the way for a referendum on the issue in spring which, if passed, could allow President Tayyip Erdogan to stay in office until 2029.

Erdogan says the reform will provide stability in the European Union candidate country at a time of turmoil and prevent a return to the fragile coalitions of the past. His opponents fear it will herald increasingly authoritarian rule.

The constitutional reform bill was approved overnight with 339 votes in the 550-member assembly, parliament said on its official Twitter account on Saturday. The legislation needed at least 330 deputies to support it in order to go to a public vote, reports Reuters.

Erdogan, speaking for the first time since parliament’s vote, called on his supporters to work “day in and day out” throughout the referendum campaign.

“My people will give the final decision… I believe this referendum period will conclude with the will of our people,” Erdogan said at an opening ceremony in Istanbul.

Justice Minister Bekir Bozdag, along with other ruling party politicians, took to Twitter after parliament’s decision, and voiced support for the changes.

“A new door in Turkish history and in the lives of the Turkish people has been cracked open today. With our people’s ‘yes’ vote, this door will be completely opened,” Bozdag wrote on Twitter.

The leader of the main opposition CHP, Kemal Kilicdaroglu, said after the voting that his party would fight the changes in their referendum campaign.

“This is a betrayal by the parliament of its own history. Our people will certainly thwart the game that was played in parliament… We will go from door to door and explain this to our people,” Kilicdaroglu said.

Erdogan assumed the presidency, a largely ceremonial position, in 2014 after over a decade as prime minister with the ruling AK Party, which he co-founded. Since then, pushing his powers to the limit, he has continued to dominate politics by dint of his personal popularity.

With the reforms, the president will be allowed to retain ties to a political party, potentially allowing Erdogan to resume his leadership of the AK Party, in a move that opposition parties say will abolish any chance of impartiality. The plans envisage presidential and general elections to be held together in 2019 with a president eligible to serve a maximum two five-year terms.

Critics accuse Erdogan of increasing authoritarianism with the arrests and dismissal of tens of thousands of judges, police, military officers, journalists and academics since a failed military coup in July.

Erdogan and the government say the extent of the crackdown is justified by the nature of the threat to the state from July 15, when rogue soldiers commandeered tanks and fighter jets in a violent bid to seize power.

Erdogan on Saturday also revived the question of reintroducing the death penalty, which some of his supporters had called for in the wake of July’s coup attempt.

“I believe this issue (death penalty) will be debated in parliament again after the referendum period. Once it passes parliament, let me say again that I will approve it,” Erdogan said.

The restoration of the death penalty, which Turkey formally abandoned in 2002 as part of its European Union accession talks, would likely spell the end of Turkey’s talks to join the bloc.