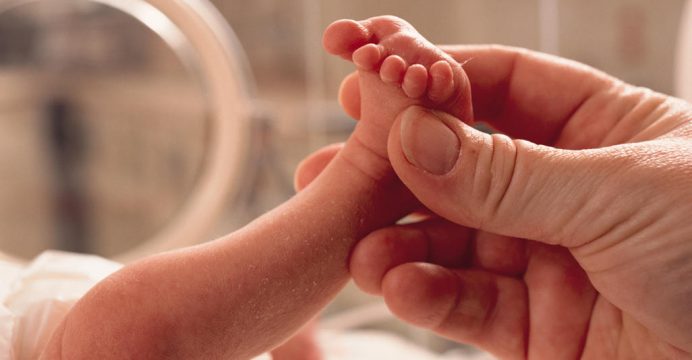 Adolescents who were born extremely premature are much more likely to have chronic health problems than their peers who were delivered at full term, a Swedish study suggests.

In the weeks immediately after birth, these early arrivals often have difficulty breathing and digesting food. They can also encounter longer-term challenges such as impaired vision, hearing, and cognitive skills as well as social and behavioral problems.

Premature baby in an incubator

“At school age, many extremely preterm children whose general intelligence is normal or in the lower normal range have motor impairments, behavioral problems, social problems and academic underachievement,” Farooqi added by email.
Farooqi’s team studied 134 youngsters ages 10 to 15 who were born extremely preterm, plus 103 children who were full-term infants but otherwise similar.
Compared to the full-term group, adolescents in the preemie group were 15 times more likely to have severe physical or mental impairments and more than five times as likely to require more medical or educational services than children typically need, the study found.

Overall, 64 percent of the preemies in the study had functional limitations, compared with 6 percent of the full-term teens, researchers report in Pediatrics. This included mental or emotional developmental delays as well as an inability to play and socialize.

In addition, 60 percent of the adolescents who were preterm infants needed special equipment or assistance to complete daily tasks like walking, feeding, dressing and using the bathroom, compared to just 29 percent of the teens who were born full-term.

Roughly 64 percent of the teens born preterm needed routine care from a physician or specialist for a chronic health problems or special services like physical or occupational therapy, nursing care or special school arrangements. That was true for 25 percent of other kids in the study.

Even though the study didn’t examine what factors might cause problems for extremely preterm babies who survive to adolescence, disruptions in brain and central nervous system development may be part of the problem, Farooqi said.

The study was small and it wasn’t designed to see how birth timing influences health in adolescence, however. Complications that are common in extremely preterm infants, such as central nervous system injuries, lung disease, eye problems and infections, “have been shown to be related to many of the chronic health problems” Farooqi noted.

Still, there are things parents can do for preemies that may make a difference later on, said Dr. Jill Zwicker, a researcher at the University of British Columbia in Canada who wasn’t involved in the study.