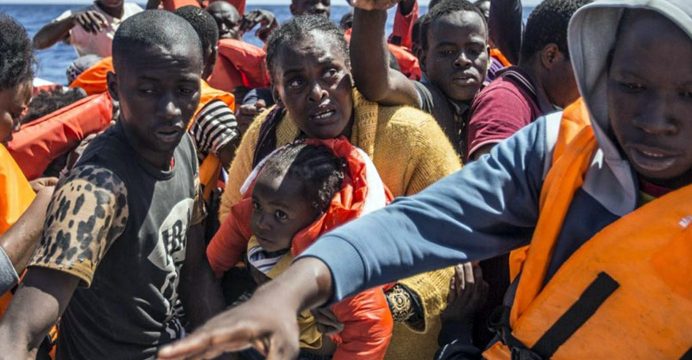 On 12 January, during the one-day visit, IOM officials met with the leadership of the Libyan Coast Guard to discuss the outcomes of a needs assessment conducted last year. This assessment aimed to identify ways to improve the infrastructure of Libyan disembarkation points and enhance the capacity of government agencies involved in rescue operations. A work-plan for a capacity building programme was discussed during the meeting and concrete steps for the rehabilitation and provision of communication equipment was agreed.

According to IOM’s Missing Migrants Project (http://missingmigrants.iom.int), 4,576 deaths were recorded in 2016 among migrants crossing the central Mediterranean trying to reach Italy. Most of the victims left from Libya. In 2016, IOM recorded 18,904 migrants rescued off the Libyan coastline.

During 2016, IOM – with help from the European Union’s Regional Development and Protection Programme – supported Libyan rescue-at-sea operations in multiple ways.

It also provided the Libyan Coast Guard with 10 desktop and10 laptop computers and offered expertise in establishing a database of information on rescued migrants.

While many of those rescued may later have made new attempts to sail to Europe – and some of those may have perished – IOM, through its Assisted Voluntary Return and Reintegration (AVRR) programme, was able to repatriate some 3,000 migrants to sub-Saharan Africa in 2016. Many of those returnees had previously been rescued at sea.

IOM Libya reports that the majority of rescue-at-sea operations have taken place in the western part of the country, with 13,024 people rescued off Az Zawiyah, 1,933 off Tripoli, 1,803 off Sabratha, 1,681 off Zuwara and 505 off Al Khums.

Despite harsh winter weather and rough seas, migrants continue to embark on the perilous journey across the Mediterranean. So far in 2017, 184 migrants have been rescued at sea, despite the Coast Guard’s lack of seaworthy vessels and equipment.