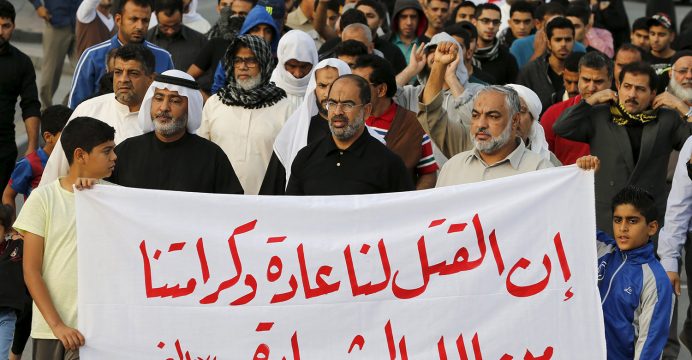 Bahrain on Sunday executed three Shi’ite Muslim men convicted of killing three policemen in a 2014 bomb attack, the first such executions in over two decades, drawing condemnation from foreign officials in the region and beyond.

Activists in Bahrain reacted with rage to the move, calling it a “black day” for the Gulf Arab kingdom’ and posting images of protestors clashing with police on social media. Reuters was unable to verify the protests.

The executions came less than a week after the country’s highest court confirmed the punishment against Abbas al-Samea, 27, Sami Mushaima, 42, and Ali al-Singace, 21, found guilty of killing one Emirati and two Bahraini police officers.

“Bahrain’s government has demonstrated that it does not seek a peaceful resolution and a way out out of the crisis,” said Foreign Ministry spokesman Bahram Qasemi, quoted by the official news agency IRNA.

Such executions are extremely rare in the small Gulf Arab island. The last similar case involving a Shi’ite Bahraini occurred in 1996.

British Foreign Secretary Boris Johnson said in a statement that Britain opposes the death penalty and he “raised the issue with the Bahraini Government.”

Bahrain’s majority Shi’ite population have for decades accused their Sunni rulers of discrimination in matters of jobs, housing and political say. Bahrain says Shi’ite neighbour Iran is supporting violence in the kingdom in a bid to widen its influence, a charge Tehran denies.

State news agency BNA said the men were shot and killed in the presence of a judge, doctor and a Muslim cleric.

Images posted by Bahraini activists on social media after the news showed demonstrators blocking roads with burning tires and throwing rocks at police who responded with tear gas in several Shi’ite villages.

Mass “Arab Spring” demonstrations in 2011 that were led by Shi’ites were crushed by the authorities with help from its Gulf Arab neighbours, deepening sectarian rivalry in the region.

Authorities last year escalated a crackdown on its Shi’ite critics by imprisoning a top rights campaigner, shuttering the main opposition block and revoking the community’s spiritual leader of his citizenship.