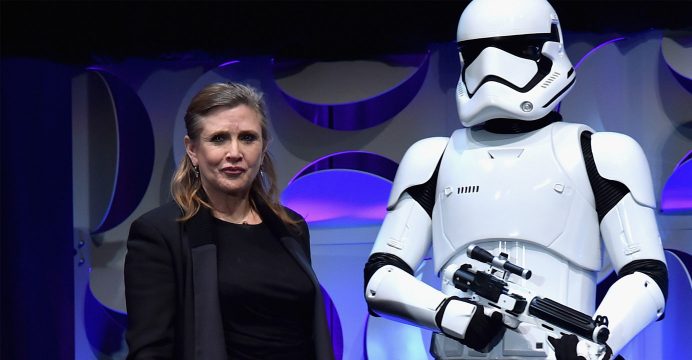 The studio behind the “Star Wars” movie franchise said on Friday is has no plans to digitally recreate film performances of the late actress Carrie Fisher, best known for her role as Princess Leia, in upcoming installments of the blockbuster series.

Speculation had mounted since Fisher died unexpectedly last month, at age 60, that filmmakers might use new advances in computer graphics technology to resurrect digital images of the actress in forthcoming chapters of the “Star Wars” film epic.

Such technology was notably utilized in the newly released “Rogue One: A Star Wars Story,” in which a digital embodiment of British actor Peter Cushing, who died in 1994, returned for the role of the Grand Moff Tarkin that he first played in the original 1977 “Star Wars” adventure.

The Walt Disney Co-owned Lucasfilm, producers of the “Star Wars” franchise, posted a statement online putting to rest the notion that Fisher’s image would likewise be recreated.

“We want to assure our fans that Lucasfilm has no plans to digitally recreate Carrie Fisher’s performance as Princess or General Leia Organa,” the studio said.

“Carrie Fisher was, is and always will be part of the Lucasfilm family,” the statement added. “She was our princess, our general and more importantly, our friend. We are still hurting from her loss. We cherish her memory and legacy as Princess Leia, and will always strive to honor everything she gave to ‘Star Wars.'”

Fisher appeared in four of the “Star Wars” films, beginning with the original 1977 movie and its two sequels, playing the intrepid Princess Leia as a young actress.

She returned in Disney’s 2015 reboot of the franchise, the “The Force Awakens,” appearing as the more matronly General Leia Organa, leader of the Resistance movement fighting the evil First Order.

She had already filmed her role for the upcoming untitled sequel to that film – “Episode VIII” – which is due for release in 2017, and had been expected to reappear in “Episode IX” out in 2019.

The statement by Lucasfilm on Friday left in question whether her character would be written out of that film or another actress would be hired to play the Leia role.

Fisher died following a heart attack she suffered during a flight to Los Angeles from London, where she had been shooting the third season of the British sitcom “Catastrophe.”