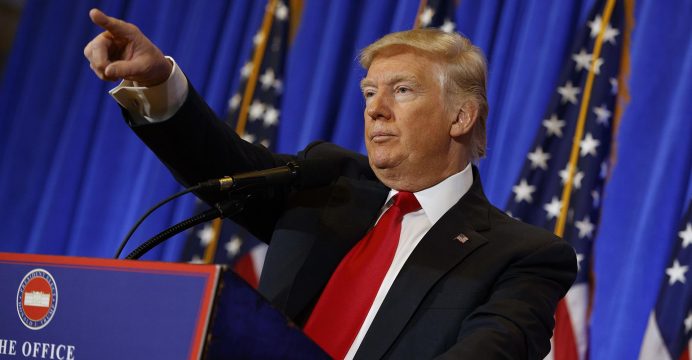 An ex-MI6 officer who is believed to have prepared a memo claiming Russia has compromising material on US President-elect Donald Trump is now in hiding, the BBC understands.

Christopher Steele, who runs a London-based intelligence firm, is believed to have left his home this week.

The US president-elect said the claims were “fake news” and “phoney stuff”.

Mr Steele has been widely named as the author of a memo – which has been published in some US media – that contains extensive allegations about Mr Trump’s personal life and his campaign’s relationship with the Russian state.

Among the allegations are that Moscow has a video recording of Mr Trump with prostitutes and damaging information about his business activities.

BBC news correspondent Paul Wood said he understood Mr Steele left his home on either Tuesday or Wednesday, before he was publicly named, and was now “in hiding”.

He said he had been told Mr Steele had asked his neighbour to look after his cats.

Our correspondent said he had been shown the memos about Mr Trump in October last year, when he was told Mr Steele was “in fear of his life”, having spoken out about potential Russian involvement in Mr Trump’s election.

He said he had been told by members of the intelligence community that Mr Steele was “extremely, highly regarded” and was thought of as “competent”.

The central allegation made in the memos was that Mr Trump was “vulnerable to blackmail”, he added.

Mr Steele has not responded to the BBC’s request for a comment on the revelations about Mr Trump.

Claims about a Russian blackmail tape were made in one of a series of reports written by a former British intelligence agent.

As a member of MI6, he had been posted to the UK’s embassy in Moscow and now runs a consultancy giving advice on doing business in Russia. He spoke to a number of his old contacts in the FSB, the successor to the KGB, paying some of them for information.

They told him that Mr Trump had been filmed with a group of prostitutes in the presidential suite of Moscow’s Ritz-Carlton hotel.

I know this because the Washington political research company that commissioned his report showed it to me during the final week of the election campaign.

The BBC decided not to use it then, for the very good reason that without seeing the tape – if it exists – we could not know if the claims were true. The detail of the allegations were certainly lurid.

The entire series of reports has now been posted by BuzzFeed.

Mr Steele, who was initially named in the US, is believed to be a former member of the Secret Intelligence Service – MI6 – and is a director of Orbis Business Intelligence – which describes itself as a leading corporate intelligence consultancy.

BBC security correspondent Frank Gardner said he had been an intelligence officer – rather than agent – in MI6, who would have run a team of agents as an intelligence gatherer.

However, Mr Steele was now working in the private sector, our correspondent said, adding that there was “probably a fair bit of money involved” in the commissioning of the dossier.

Christopher Burrows, who is listed as a co-director of Orbis alongside Mr Steele, refused to confirm or deny whether the firm had produced the report on Mr Trump.

Founded in 2009 by former British intelligence professionals, the firm – based in Grosvenor Gardens, central London – has a “global network” of experts and “prominent business figures”,, according to its website.