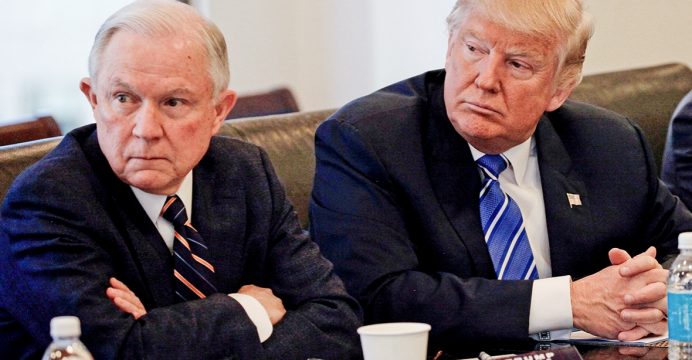 Republican Senator Jeff Sessions faced interruptions and questions on his ability to be independent and go against Donald Trump if necessary as the first confirmation hearing for the president-elect’s Cabinet nominees got under way on Tuesday.

Sessions, nominated to be attorney general, became the first sitting senator to endorse Trump for the presidency in early 2016 and has remained a close advisor on issues such as immigration, reports Reuters.

“This job requires service to the people and the law, not the president,” Feinstein said.

“There is a deep fear about what a Trump administration will bring in many places. And this is the context in which we must consider Senator Sessions’ record and nomination,” Feinstein added.

Protesters repeatedly interrupted the start of Sessions’ hearing, some dressed in KKK robes and another holding a sign that said “Support Civil Rights, Stop Sessions.”

Sessions was denied confirmation to a federal judgeship in 1986 after allegations emerged that he made racist remarks, including testimony that he called an African-American prosecutor “boy,” an allegation Sessions denied.

Sessions, 70, is being questioned by the judiciary committee, a panel on which he serves, and is widely expected to be confirmed by the Republican-dominated Senate. But his record on civil rights and immigration was likely to make for a contentious hearing.

Speaking in Sessions’ favor, Republican Senator Susan Collins of Maine, considered a moderate, said she has “every confidence that Jeff Sessions will execute the office of AG honestly, faithfully and fully in the pursuit of justice.”