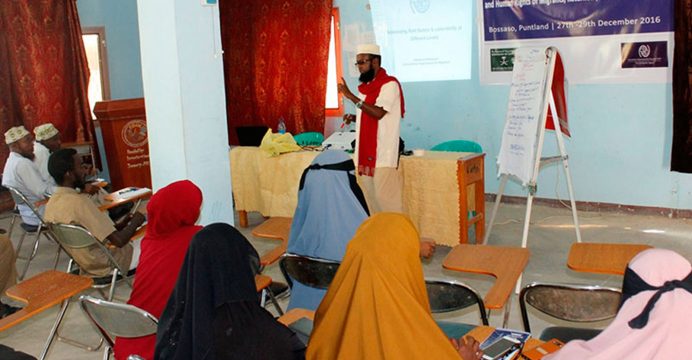 IOM, with support from the King Salman Humanitarian Aid and Relief Centre (KSrelief), held a training on human trafficking, smuggling and human rights for migrants for 25 officials from Puntland’s education sector. The training participants comprised five officials from the Somali state’s Ministry of Education, 15 head teachers and five university lecturers.

The training was designed to raise awareness of the potential risks and dangers of human trafficking and smuggling. It also addressed respecting the human rights of refugees, returnees and migrants in schools or other institutions of learning.

The Ministry of Education is a key stakeholder in Puntland’s fight against human trafficking and smuggling and can help sensitize children and young people enrolled in educational institutions to the risks posed by irregular migration.

Internally displaced persons, returnees, refugees, graduates and other vulnerable young people are often persuaded to take perilous journeys across the Indian Ocean or the Gulf of Aden in search of a better life in Europe or the Gulf States.

Young people are a major target group for smugglers, as many graduates, high school leavers and out of school youth are unemployed and are willing to risk migrating through irregular channels.

“This training is timely as cases of human trafficking and smuggling have been reported in Bossaso. The community needs to be sensitized to these issues and the Ministry of Education has a key role to play in the fight against human trafficking and smuggling,” said Shamis Muse Koonte, the Bari Regional Officer at the Ministry of Education, who is the ministry’s focal point working with the Puntland Counter-Trafficking Board. The Board comprises 22 government officials from nine Puntland ministries.

The training – the second in a series of six on counter-trafficking, smuggling, and human rights – is part of a USD 10 million project that will benefit almost 20,000 people, who have fled to Somalia from war-torn Yemen. The project is being implemented by IOM and UNHCR, in close coordination with the Somalia Task Force on the Yemen Situation, and respective regional and local authorities.