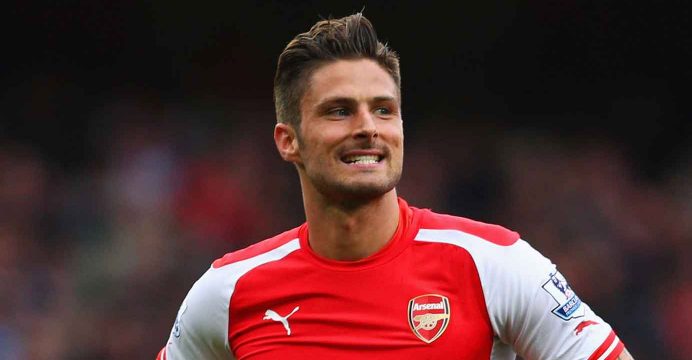 Arsene Wenger hailed the performance of stand-in Arsenal captain Olivier Giroud after his late goal sealed a 2-1 FA Cup third round win at Championship side Preston.

The Gunners managed to complete a comeback victory to go with their remarkable 3-3 draw at Bournemouth earlier in the week, a game in which Giroud also scored a late, vital goal.

Wenger had also made his countryman captain for the trip to Deepdale and he explained: “He has scored many many goals recently. I think in the squad everybody contributes and it is not just 11.

“At the moment he is in good form and in the last month he has scored goal after goal so I named him captain as I like to rotate it a bit.

“He went through a period where he was in discomfort as he didn’t play and during this period, which was quite long, he kept his focus and worked so I thought he has shown leadership qualities, which is why I made him captain.”

There was also good news for another Arsenal forward, Danny Welbeck, who returned as a late substitute, his first competitive football in eight months after recovering from a knee ligament injury.

“It is a great moment as he has been out for such a long time, just for him to get 15 minutes was great,” said Wenger.

“I had a hesitation but he thought he had 20 minutes in his legs and in the end he nearly scored so that is good.”

But the victory disguised a dreadful first half showing from Wenger’s side who were fortunate to only trail to a Callum Robinson goal at the interval.

An equaliser from Aaron Ramsey within a minute of the restart was the beginning of a vastly-improved second half showing from the Premier League side.

“Yes, I was angry,” said Wenger of his half-time reaction. “We are top-level Premier League and we were dominated in the first half, Preston had chances and we were just not at the pace of the game that the game demanded. We didn’t want to go home and be out of the cup.