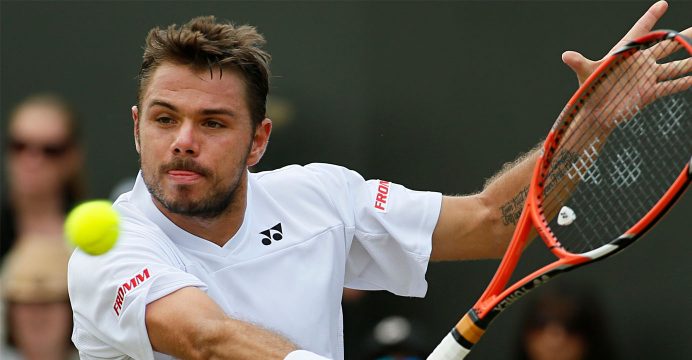 World number four Stan Wawrinka began the new season with a straight-sets victory over Viktor Troicki in his Brisbane International debut on Wednesday.

Second seed Wawrinka edged out Troicki 7-6(5) 6-4 to maintain his perfect record against the Serbian whose seventh attempt at beating the Swiss failed at the Pat Rafter Arena, reports Reuters.

“I’m quite happy with my level at the start the year,” Wawrinka said.

“I think it was a good match, in general, for sure. A few up-and-downs with focus and my (shot) choice during the game, but it’s always tough to play against Troicki.”

Troicki was serving for the first set at 5-4 when Wawrinka scripted a turnaround to claim it.

The three-times grand-slam champion took charge in the second when Troicki double-faulted at 4-4 and he clinched the contest to set up a quarter-final clash with Briton Kyle Edmund.

Third seed Kei Nishikori had to work harder to secure his quarter-final berth with a 4-6 6-4 6-3 win over free-swinging American Jared Donaldson.

Nishikori was 4-0 up and yet lost the first set as Donaldson reeled off six games on the trot.

Nishikori let a 3-0 lead slip in the second as well but the 2014 U.S. Open finalist managed to arrest the slide to force the decider and was more assertive in the third set against the 105th-ranked qualifier.

“I had a great start today until 4-0, and then I had one bad game,” Nishikori said.

“He started playing more aggressive and his forehand was on fire –- he was hitting a lot of winners from that side.”

In the women’s section, world number one Angelique Kerber survived a scare in her first competitive match of the year to beat Australian wild card Ashleigh Barty 6-3 2-6 6-3 and set up a quarter-final clash with Ukrainian sixth seed Elina Svitolina.

Barty’s aggressive approach initially startled Kerber, who had a first-round bye. The German hit 14 of her 27 unforced errors in the second set but maintained her composure to close out the evenly-contested affair in an hour and 45 minutes.