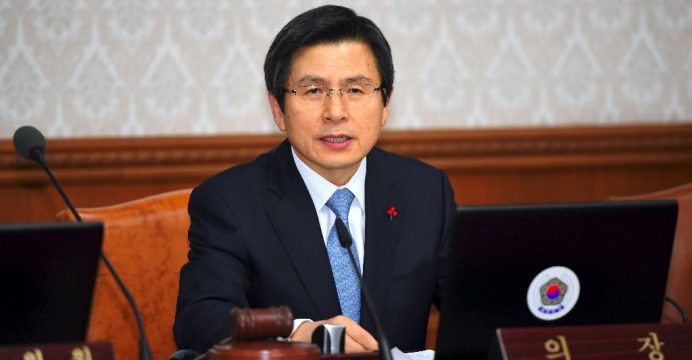 South Korea’s acting president pledged a return to stability on Sunday in a New Year message aimed at reassuring the country after a political crisis triggered President Park Geun-Hye’s impeachment.

“This year as always, I will do what I can to the best of my ability to bring state affairs under stable management,” Hwang said in a televised New Year’s speech to the country.

Parliament voted on December 9 to impeach Park over a corruption scandal in which she is accused of colluding with close friend Choi Soon-Sil to strong-arm companies into handing over tens of millions of dollars to dubious foundations which Choi controlled.

The case is now being considered by the Constitutional Court — which has up to six months to reach a ruling — but hundreds of thousands of South Koreans have joined weekly protests calling for Park’s immediate departure from office.

“Yet another task of the times is to realize unity among the people and social cohesion,” Hwang said.

If the impeachment is confirmed, a presidential election will have to be held within 60 days. South Korea is also suffering from an extended slowdown in economic growth, amid growing concern over North Korea’s push for nuclear statehood — two issues which are further affected by the presidential transition in key ally the United States.

Despite having been suspended from her executive duties since the impeachment vote, Park has remained defiant, declaring she will wait for the Constitutional Court arrives at a decision. Choi has been formally indicted on charges of abuse of power and extortion.