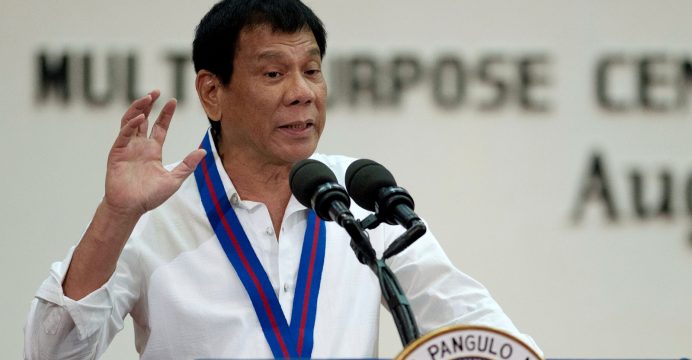 Philippine President Rodrigo Duterte on Thursday said the failure of the United States to thwart China’s island-building in the South China Sea showed there was no serious concern about its militarization or reclamation work.

The firebrand leader reiterated he wanted to avoid confrontation with China and saw no need for urgency in pressing it to abide by a July ruling by an international tribunal on its South China Sea claims that went in favor of the Philippines, reports Reuters. Asked during a television interview when he would address the issue, Duterte said it would happen “during my time” but he was not yet ready to discuss the ruling by the Permanent Court of Arbitration in The Hague and neither was China.

He said he had no intention of aggressively pursuing the Philippine maritime claim and taking on China and the only power capable of doing so was the United States.

“I cannot let is pass and be neglected,” he told CNN Philippines, referring to the ruling that rejected China’s extensive claims in the South China Sea.

“But are you ready to talk with me now? Because if you are not, I am not ready,” he said, referring to China.

Duterte made a stunning U-turn in foreign policy a few months ago when he made overtures towards longtime rival China and started berating traditional ally the United States.

He has previously played down the arbitration case, saying it would “take a back seat” during his talks in China in October.

He has frequently praised China and said he wants it to play a prominent role in his economy.

Duterte also played down concerns that China was militarizing the South China Sea and appeared unperturbed by its dredging work and building activity on reefs, several of which were within Manila’s Exclusive Economic Zone (EEZ).

Asked if he was worried, he said. “No. Because if it was really a serious concern, then the United States should lead the way and stop it.

“I said, right at the beginning, when the first spray of soil was tossed out to the area they (China) reclaimed, why did their (U.S.) think-tank not think?”

Duterte said the one situation where he would take a stand against China was if it were to start exploiting natural resources within Philippine sovereign territory. He likened it to children bickering over inheritance.