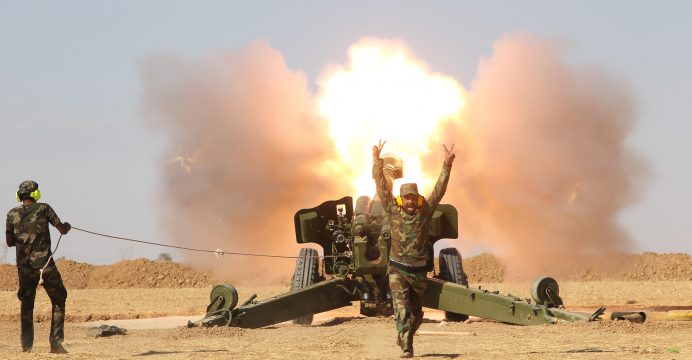 Iraqi security forces on Thursday began the second phase of their offensive against Islamic State militants in Mosul, pushing from three directions into eastern districts where the battle has been deadlocked for nearly a month.

Since the offensive to capture Mosul began 10 weeks ago, counter-terrorism forces have retaken a quarter of the city, the jihadists’ last major stronghold in Iraq, but their advance has been slow and troops on other fronts have made little progress, reports Reuters.

The campaign, the biggest ground operation in Iraq since the U.S.-led invasion of 2003 that toppled Saddam Hussein, entered its first significant pause earlier this month for a planned “operational refit”.

But on Thursday, more than 5,000 soldiers and militarised federal police troops who had redeployed from Mosul’s southern outskirts entered half a dozen southeastern neighbourhoods, while counter-terrorism forces advanced in al-Quds and Karama districts after receiving reinforcements.

“At 0700 this morning the three fronts began advancing towards the city centre. The operation is ongoing today and tomorrow and until we liberate the eastern side of the city completely,” Lieutenant General Ali Freiji, who was overseeing army operations in the north, told Reuters.

The fall of Mosul would probably spell the end for Islamic State’s ambition to rule over millions of people in a self-styled caliphate, but fighters could still mount a traditional insurgency in Iraq, and plot or inspire attacks on the West.

An officer from an elite Interior Ministry unit said on Thursday it was advancing alongside federal police in Mosul’s Intisar district. Islamic State resisted with sniper and machine gun fire, he said.

A plume of white smoke, likely to be from an air strike, rose from a southeastern district on Thursday morning while at the northern front heavy gunfire was audible and a suicide car bomb was disabled by the Iraqi army before reaching its target.

State TV said Islamic State defences were collapsing in the areas of Salam, Intisar, Wahda, Palestine and al-Quds and that fighters’ bodies filled the streets there.

The government’s accounts are difficult to confirm since the authorities have increasingly restricted the foreign news media’s access to the battle fronts and areas retaken from Islamic State in and around Mosul without providing a reason.

The military has not entered the city’s western side, whose built-up markets and narrow alleyways dating back more than two millennia will likely complicate advances.

The battle for Mosul involves 100,000 Iraqi troops, members of the Kurdish security forces and Shi’ite militiamen.

U.S. commanders have said in recent weeks that their military advisers, part of an international coalition fighting Islamic State, will embed more extensively with Iraqi forces.

Some of them were spotted on a rooftop behind the front lines on Thursday, advising Iraqi commanders and watching over the operations.

“The orders from the senior commanders are clear: no halting, no retreat until we reach the fourth bridge and link up with counter-terrorism units,” he said.

The coalition bombed the last remaining bridge connecting the eastern and western parts of Mosul late on Monday in a bid to block Islamic State from redeploying and resupplying its fighters across the Tigris River.