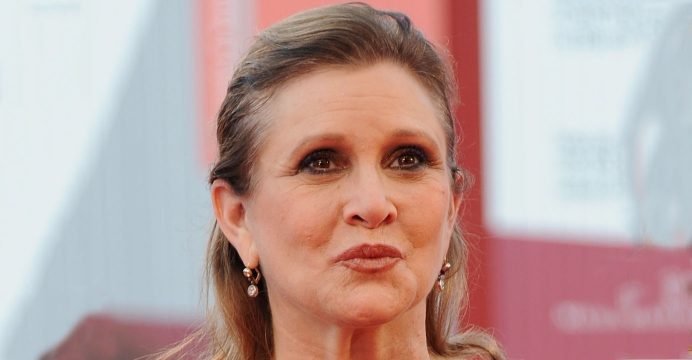 After decades of fast living that her fearless “Star Wars” character Princess Leia would have struggled to keep up with, Carrie Fisher died Tuesday following a massive heart attack. She was 60.

The American actress, best-selling author and screenwriter who suffered from numerous addictions she later turned into writing gold was a member of Hollywood royalty, both on screen and off, reports BSS.

Born in Los Angeles in October 1956, the daughter of actress Debbie Reynolds and singer Eddie Fisher became an international star overnight with the release of “Star Wars” in 1977.

Leia was the tough rebel princess in a white dress with a strange hairdo and blaster guns, who was unafraid to stare down the villainous Darth Vader.

Six years later in “Return of the Jedi,” she became a sex symbol in a barely-there metal bikini — but remained the tough heroine, killing her slug-like gangster jailer Jabba the Hutt by choking him with the chain he used to hold her captive.

The blockbuster space saga is now part of pop culture legend and a worldwide fan favorite. Fisher was back in the spotlight after reprising her iconic role in 2015’s “Star Wars: The Force Awakens.”

She was returning Friday from the London leg of a tour promoting her headline-grabbing memoir “The Princess Diarist” when she collapsed 15 minutes before landing in Los Angeles, where paramedics and hospital staff were unable to revive her.

“It is with a very deep sadness that Billie Lourd confirms that her beloved mother Carrie Fisher passed away at 8:55 this morning,” family spokesman Simon Halls said in a statement to AFP on behalf of Fisher’s daughter.

Tributes began pouring in soon after news of her death spread on social media, led by “Star Wars” co-stars Mark Hamill Luke Skywalker in the saga who initially tweeted that he was “devastated” and had “no words.”

“It’s never easy to lose such a vital, irreplaceable member of the family, but this is downright heartbreaking,” he said later. “Carrie was one-of-a-kind who belonged to us all whether she liked it or not.”

The legendary filmmaker Steven Spielberg described her as “a force of nature, of loyalty and of friendship” while Walt Disney Company chief Bob Iger said she was “a true character who shared her talent and her truth with us all.”