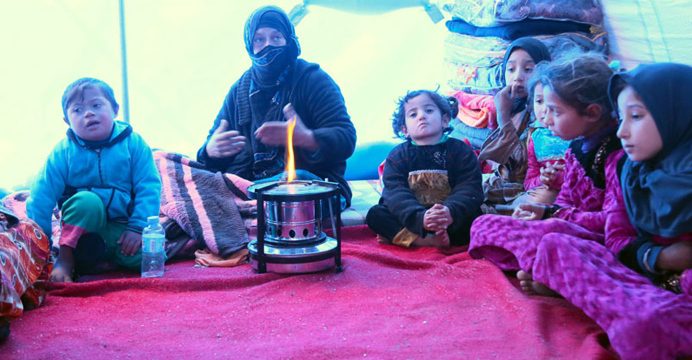 In emergency centers, tents are filling with people who speak of leaving Mosul at night under the cover of darkness to avoid the militants’ wrath.

It’s a tough slog, many say, with trenches militants have dug to prevent people from escaping filling with mud and rain as winter temperatures drop across northern Iraq.

It was a cold rainy night last week when most residents of Hay Somar district in Mosul decided to escape from the indiscriminate bombing. Abdul Nasser, 35, his six children, wife, sister and elderly mother left their homes around midnight.

“We walked silently and quickly. No one talked to the others for fear of ISIS hearing us,” Abdul Nasser recounted. But trenches filling with rain and mud were a constant obstacle. “People fell into them and were buried in mud – if you were ahead you could not turn back and save them. If you were walking past and saw someone down you tried to help them out,” Nasser recounted with horror.

Abdul Nasser carried his elderly mother on his back; his sister carried the couple’s disabled child, Atallah.

They walked for six hours under the rain. At times he would get tired and his mother would slip down from his back forcing him to haul her back on, action that eventually cracked several of her ribs.

He said he later heard two women had been left behind.

“Go, leave me, save the children,” his mother begged him in pain, but the family trudged through the night until they made it to safety.

Many of those fleeing have since taken refuge at the Hasan al-Sham and Khazir camps in Erbil province; the Zulaykan camp in Duhok province; and the Jadaa camp in the town of Qayarah in Nineveh province. With most camps reaching full capacity, IOM’s Emergency Site in Al-Qayara Airstrip in Ninewa governorate had begun seeing a steady influx of internally displaced persons (IDPs).

Abdul Nasser and his family eventually arrived at Jadaa-3 exhausted, but happy to be alive. Baby Mona’s family, who arrived at nearly the same time, were also happy to reach the safety of the camp.

Baby Mona was born 18 days ago with little fanfare, just one of thousands of people who managed to escape from the fighting raging around Mosul, a city of 1.4 million in Ninewa governorate. Her family fled Mosul’s east side nearly two months ago, when militants gave local inhabitants an hour to leave or risk being killed.

With hardly any money, the impoverished family began their long escape, stopping along the way for rest and food in abandoned homes, or with Good Samaritans who took them in as they journeyed through northern Iraq.

“We left with nothing but the clothes on our backs,” said Mona’s mother Hanaa, 40. “Every day we walked a bit and good people would take us in, help and feed us as we moved along,” she explained.

Hanaa left Mosul with 17 family members. Sometime earlier this month, in an abandoned home where they were searching for crumbs of food, she delivered her baby without assistance.

“I gave birth to her alone and then cut the umbilical cord with scissors,” she said, explaining she knew how to do this from previous experience. “We had no money to go to a doctor or a hospital along the way,” she added.

After resting for a day the family moved again and Hanaa carried her baby wrapped in her arms. “When I got tired, my elder daughters and sons helped me carry her,” she said.

But the days were cold and the nights freezing, as temperatures plummeted in northern Iraq. Torrential rain was also hard to avoid and although Hanaa tried to keep her daughter warm, wrapping her inside her shawl, the damp from the rain was hard to prevent at times.

Finally, on Monday (19/12), nearly two months after they began their escape from Mosul, Mona and her family arrived at an army post that took them in, fed the children and offered beds for the night.

On Tuesday they were packed into a pick-up truck with others and brought to Jada’a-3 camp, in the town of Qayarah.

When Hanaa arrived on Tuesday night she knew her baby girl was sick. “She was refusing to feed and vomited blood after we arrived,” she said.

Hanaa settled her other children around her, sharing the few blankets and mattresses given to them by people in neighbouring tents and sat with Mona in her arms.

“I stayed up all night with her in my arms, hoping and praying that she would be fine. By in the early hours of dawn she vomited more blood,” she said quietly, before breaking down in tears. Later that day Baby Mona died – her brief life ending only hours after her family reached safety, following a perilous and arduous journey.

It took several hours for Mona’s father, Abdullah, to finalize the necessary paperwork that would allow him to bury his daughter in a nearby cemetery. Hanaa said she kept Mona in her arms during that time, unable to let go of her.

“She went cold in my arms by the time everything was ready for her to be taken for burial,” she said.

On Wednesday, as IOM staffers tried to console Hanaa and the rest of the family, Abdullah was quietly burying Mona in a nearby cemetery.

Of the thousands of Iraqis who have been displaced by Mosul operations since October 17, many are in desperate need of life-saving humanitarian assistance, especially in the cold winter months. In the last ten days alone, over 12,000 IDPs arrived at IOM’s Emergency Site in Qayara, occupying 4,760 plots. Work to expand the site to 10,000 plots, including internal roads and drainage, is ongoing.

The site was established by IOM in cooperation with Iraq’s Ministry of Displacement and Migration (MoMD) and is managed by humanitarian partners. An additional 1,500 tents received from MoMD are rapidly being set up in anticipation of additional arrivals.