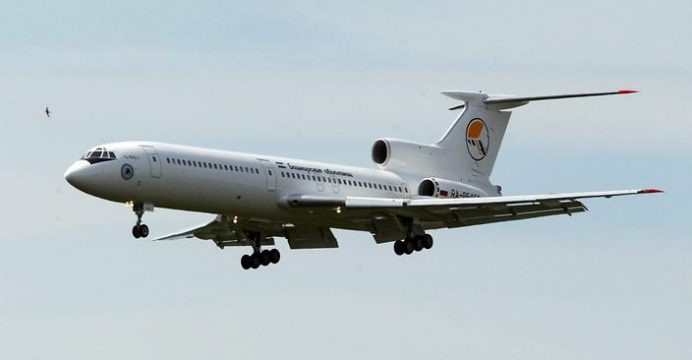 A Russian military plane crashed Sunday in the Black Sea as it made its way to Syria with 91 people onboard, including musicians heading to celebrate the New Year with troops.

Local news agencies, citing the defense ministry, said the Tu-154 plane had crashed shortly after taking off from the southern city of Adler, south of the Black Sea resort city of Sochi, at 5:40 am local time (0240 GMT), reports BSS.

It was conducting a routine flight to Russia’s Hmeimim airbase outside the coastal Syrian city of Latakia, the ministry said.

“Fragments of the Tu-154 plane of the Russian defense ministry were found 1.5 kilometers from the Black Sea coast of the city of Sochi at a depth of 50 to 70 meters,” the ministry said, adding that search and rescue groups had been dispatched earlier Sunday to locate the missing.

Among its 83 passengers were Russian servicemen as well as members of the Alexandrov Ensemble, the army’s official musical group internationally known as the Red Army Choir, who were headed to Syria to participate in New Year celebrations at the airbase.

There were also eight crew members onboard, the ministry said. Nine members of the media were among the passengers, with state-run channel Pervy Kanal saying three of its staff were onboard the flight.

Kremlin spokesman Dmitry Peskov told Russian news agencies that President Vladimir Putin had been informed of the situation and was being kept updated on the search operations.

Russia’s Investigative Committee said that a criminal probe had been launched to determine whether violations of air transportation safety had led to the crash.

Investigators are currently questioning the technical personnel responsible for preparing the plane for take-off, the committee said.

Tu-154 aircraft have been involved in a number of accidents in the past. In April 2010 many high-ranking Polish officials, including then-president Lech Kaczynski, were killed when a Tu-154 airliner went down in thick fog while approaching the Smolensk airport in western Russia.

Moscow has been conducting a bombing campaign in Syria in support of long-time ally President Bashar al-Assad since September 2015 and has taken steps to boost its presence in the country.

Putin in October approved a law ratifying Moscow’s deal with Damascus to deploy its forces in the country indefinitely, firming Russia’s long-term presence in the country.

Russian warplanes have flown out of the Hmeimim base to conduct air strikes in Syria, and the base is also home to an S-400 air defense system.