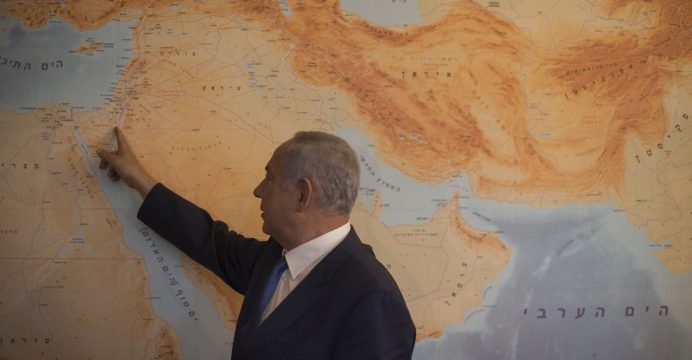 Israel summoned the ambassadors of 10 nations to Jerusalem to reprimand them on Sunday and had more harsh words for the Obama administration over a U.N. Security Council resolution demanding an end to settlement-building.

Prime Minister Benjamin Netanyahu put his personal imprint on the show of anger by repeating at the weekly cabinet meeting what an unidentified Israeli government official contended on Friday – that Washington had conspired with the Palestinians to push for the resolution’s adoption, reports Reuters.

The White House has denied the allegation.

The vote passed in the 15-member Security Council on Friday because the United States broke with its long-standing approach of diplomatically shielding Israel and did not wield, as a permanent member of the forum, its veto power, instead abstaining.

“According to our information, we have no doubt the Obama administration initiated it (the resolution), stood behind it, coordinated the wording and demanded it be passed,” Netanyahu told the cabinet in public remarks.

Ambassadors from 10 of the 14 countries that voted in favor of the resolution and have embassies in Israel – Britain, China, Russia, France, Egypt, Japan, Uruguay, Spain, Ukraine and New Zealand – were summoned to the Foreign Ministry in Jerusalem, the ministry said.

Sunday is a regular work day in Israel, but most embassies are closed, and calling in envoys on Christmas Day is highly unusual.

At the weekly cabinet meeting on Sunday, Netanyahu described a telephone conversation with U.S. Secretary of State John Kerry on Thursday, when Israel and President-elect Donald Trump successfully pressed Egypt to drop the anti-settlement resolution it had put forward.

It was resubmitted a day later by New Zealand, Senegal, Venezuela and Malaysia.

“Over decades American administrations and Israeli governments disagreed about settlements, but we agreed that the security council was not the place to resolve this issue,” Netanyahu said.

“We knew that going there would make negotiations harder and drive peace farther away. As I told John Kerry on Thursday, ‘Friends don’t take friends to the Security Council’,” he said, switching from Hebrew to English.

Israel has pursued a policy of constructing settlements on territory it captured in a 1967 war with its Arab neighbors – the West Bank, Gaza and East Jerusalem, areas Palestinians seek for a state.

Most countries view the settlement activity as illegal and an obstacle to peace. Israel disagrees, citing biblical and historical connections to the West Bank and Jerusalem as well as security interests.