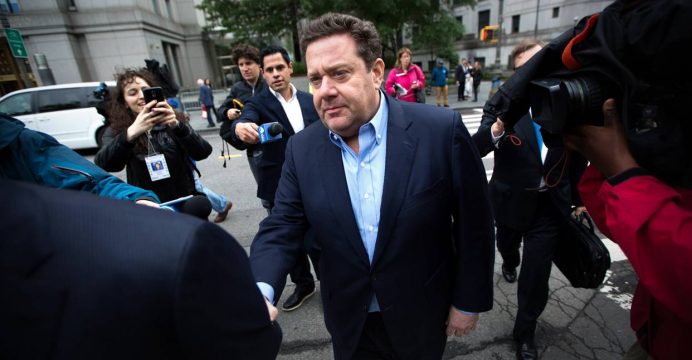 When six executives of Platinum Partners, including founder Mark Nordlicht, were arrested on Monday on federal charges of running a more than $1 billion hedge fund fraud, people who had long alleged they were harmed by the New York-based firm felt some vindication.

But the possibility that each defendant might face prison terms has done little to soothe their continued anger over losses that may never be recouped, reports Reuters.

One such person is Houston-based energy entrepreneur John Hoffman. In the charges, the U.S. Department of Justice and the U.S. Securities and Exchange Commission alleged what Hoffman had long believed – that Platinum, with the help of a seventh man also arrested, Jeffrey Shulse, had illegally profited from the failure of Hoffman’s company, Black Elk Energy Offshore Operations LLC.

Hoffman said in a telephone interview on Wednesday that he did not expect to recover anything and that his involvement with Platinum had cost him the company he founded and at least $500,000 in legal fees. He also described stress-related health problems and difficulty fundraising for a new energy venture.

Hoffman expressed anger that thousands of Gulf Coast-area families were stiffed: mostly the small businesses that were never paid for work on Black Elk’s oil and gas drilling platforms before it went bankrupt amid lower oil prices and Platinum’s alleged corporate cash grab.

All six Platinum executives pleaded not guilty and an attorney for Shulse told Reuters he plans to do the same. A spokesman for Platinum declined to comment for this article, and the firm has not offered any public comment. A person familiar with Platinum’s thinking told Reuters in April that the firm always acted within the limits of the law despite its aggressive investment approach.

Launched in 2003, Platinum was known as a high-performing hedge fund manager that backed struggling companies and employed esoteric investment strategies such as litigation finance and high-interest consumer loans.

The government charges on Monday included allegations of over-valuing assets and misleading clients on the health of the firm. The government demanded that the hedge fund return money that was allegedly illegally taken from clients and Black Elk bondholders, and pay related penalties.

That appears to complicate an already messy stew of competing claims for a relatively small pot of assets, which include funds already in supervised liquidation and bankruptcy.

Others seeking money from Platinum include approximately 600 clients whose money was frozen, and creditors and shareholders of its now-bankrupt or struggling portfolio companies, according to a variety of lawsuits against Platinum

Marc Powers, an attorney for a Platinum fund investor with BakerHostetler in New York, said it was too early to speculate on how much would be recovered from Platinum, including its hedge funds, executives, and allegedly improperly favored firm clients. But he added that it was unlikely his client and others would be made whole based on the number of claims and the facts of the case.

“It clearly doesn’t look good for any of the victims,” Powers said.

Robert McIver, a small business owner in Glasgow, Scotland, said he invested nearly $2 million with Platinum starting in 2013 after he searched on Google for top-performing hedge funds.

“From looking at the numbers, Platinum was doing great. There was no reason to suspect anything,” McIver said in a phone interview on Wednesday along with his attorney, Powers.

McIver gave Platinum money from his company, Aerial Services Scotland Ltd, and a significant part of his and his wife’s savings.

“We had a plan to retire in about five years. That’s all ruined now,” he said.

At least one person owed money by Platinum for a fund investment said he expected to recover a small portion of his assets. The person estimated that there would be several hundred million dollars left of the reported $1.3 billion following the liquidation process, based on plans such as L-3 Communications Holdings’s proposed $117.5 million purchase of assets from bankrupt explosives detection equipment maker Implant Sciences Corp, a Platinum holding.

“The funds still have material value,” said the person, who requested anonymity because he did not want to be associated with Platinum.

Houma, Louisiana-based Shamrock Energy Solutions LLC was one of about 285 creditors to put in claims for $1.2 billion when Black Elk went bankrupt.

“Obviously we are excited with the fact that justice will finally prevail,” Rene Breaux, Shamrock’s chief financial officer, said by telephone on Wednesday. “But we are very sad in the fact that we are going to have to eat about a $1 million because we got taken advantage of.”

A lawyer for Shamrock, Scott Scofield, said he would be “stunned” if unsecured Black Elk creditors like his client got more than 20 percent of their money back.