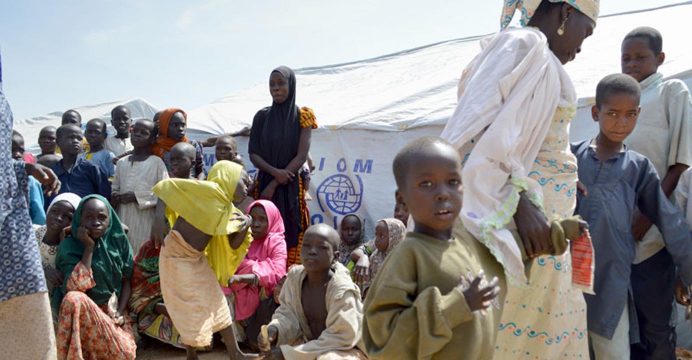 IOM has identified 1,770,444 people as displaced across Nigeria through its Displacement Tracking Matrix (DTM). This is a decrease from the 1,822,541 recorded in late October, reflecting the continuing trend of internally displaced persons (IDPs) returning home, particularly in Borno State.

Just over one million people in North-East Nigeria have returned home since August 2015. But many remain displaced, living in camps and host communities across the region. Borno State, hardest hit by the conflict triggered by the Boko Haram insurgency, still hosts the most IDPs, along with Adamawa and Yobe. More than half of the IDPs are children.

“I lost 18 cows and two cars to Boko Haram. They stole or burned all our belongings,” explained Gogoji Lawan, 24. “That’s when we left.”

She first left her home in North-East Nigeria two and a half years ago. Together with her three young children, along with two orphans they found during the journey, she moved to a displacement camp in eastern Borno State six months ago. IOM Nigeria has provided them with shelter and has equipped her to start a sewing business.

John Kulkwa, who lives in the same camp as Gogoji, is also unable to return home because of ongoing insecurity. “IOM coming around gives me hope. I used to be a photographer and loved meeting people through my job. But now, I have no camera or money,” John said. After nearly three years in an area under Boko Haram control, John and his six kids fled their village on the night of 11 March 2016.

“The need for food is increasing among the IDPs we surveyed. It is the biggest unmet need of 66 percent of the IDPs; up from 60 percent in the previous report. This means that further humanitarian interventions are still needed in the North-East. Non-food items, like blankets, continue to be second thing most in demand,” said IOM DTM project officer Henry Kwenin.

Conducted between 14 November and 13 December 2016, this round of the DTM in Nigeria covers 164 sites (camps and camp-like settings) around Adamawa, Borno, Taraba, and Yobe States. There are no formal and informal camps in Bauchi and Gombe States. The previous DTM covered 161 sites. For more data on displacement in the region, please read the full report at: Nigeria DTM Round XIII (19/12/16)