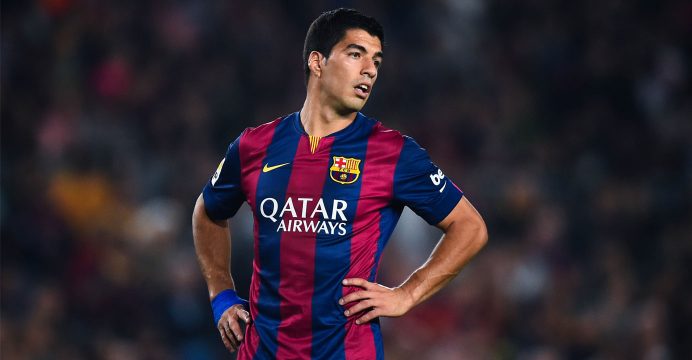 Barcelona striker Luis Suarez hopes teammate Lionel Messi will follow his lead by signing a long-term contract to see out the remainder of his prime years at the Camp Nou.

Suarez celebrated a new five-year deal by scoring twice in a 4-1 rout of Espanyol on Sunday as Barca closed to within three points of Real Madrid at the top of La Liga.

However, the Uruguayan was still overshadowed by a series of astonishing moves from Messi as he wriggled through Espanyol defenders at will before finally sealing his display with Barca’s fourth goal a minute from time.

Messi only has 18 months left on his current Barca deal.

“He is a big boy and knows what he has to decide,” Suarez told Spanish TV channel Movistar.

“He also knows where he is happy and we hope for everyone’s benefit he stays here, but he is the one that has to take the decision.”

The reason Barca will be desperate to cling onto the five-time World Player of the Year was clear once more in one particular moment of brilliance as Messi weaved his way through five Espanyol defenders before his shot was saved and Suarez swept home the rebound for his second of the night and 12th of the season to move level with Messi as La Liga’s top scorer.

“Leo’s move (for the second goal) is a PlayStation move from a unique player that only he can do,” added Suarez.