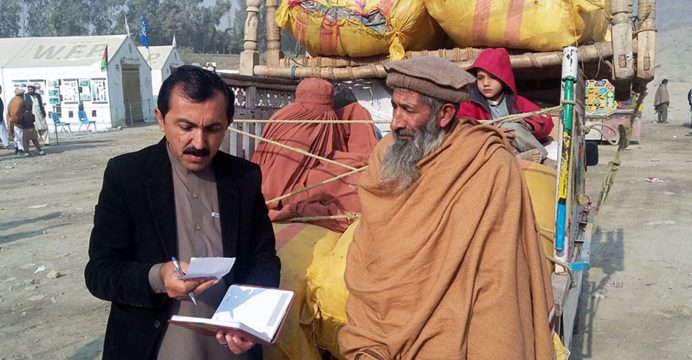 IOM has launched a socio-economic survey of undocumented Afghan families returning from Pakistan in order to better understand and respond to their needs and intentions.

The survey highlights key questions including where returnees plan to settle in Afghanistan, how much debt they are returning with, what type of job they are looking for and what labor skills they already have.

While the survey initially covers only undocumented returnees arriving through Torkham border with Pakistan in Afghanistan’s Nangarhar province, it will eventually be expanded to other border crossings where IOM is providing assistance.

Since the beginning of the year, over 660,000 undocumented Afghans have spontaneously returned or been deported from Pakistan and Iran. Returns from Pakistan have increased dramatically, from 119,000 in 2015 to over 242,000 so far in 2016.

Many of those returning, like Rahman Sayed, a 45-year-old father of five who recently arrived from Pakistan, have lived outside of Afghanistan for decades.

“My family is from Kunduz, but we fled Afghanistan in the 1980s during the war with the Russians,” Rahman Sayed told IOM staff at the Torkham border. “Pakistan has been my home ever since. I was married there and my five children were born there. In recent months, though, life has become too difficult to stay. I borrowed 30,000 Pakistani Rupees [USD 286] from my relatives and will take my family back to Kunduz, even though there is fighting there.”

The IOM survey found that the majority of undocumented returnees from Pakistan (56 percent) carry at least some level of debt, usually in the range of 10,000-30,000 Pakistani Rupees.

The survey also highlights that the majority of undocumented returnees (72 percent) have chosen to settle in Nangarhar province, which has close economic and cultural ties to Pakistan. The arrival of thousands of returnees, in addition to growing numbers of Afghans displaced by conflict, has strained already limited resources in Nangarhar and other provinces of high return.

“There is a pressing need for humanitarian actors to determine where returnees are planning to go and what they will need, as they reintegrate in Afghanistan,” said IOM Afghanistan Chief of Mission Laurence Hart. “With this tool, we can better understand these needs and intentions, as well as crucial details such as the skills returnees bring that can be integrated into local labor markets.”

The survey will be updated on a weekly basis to ensure the timeliness and accuracy of the information collected. Results and analysis are shared with IOM’s government, UN and NGO partners to coordinate assistance to returnees.