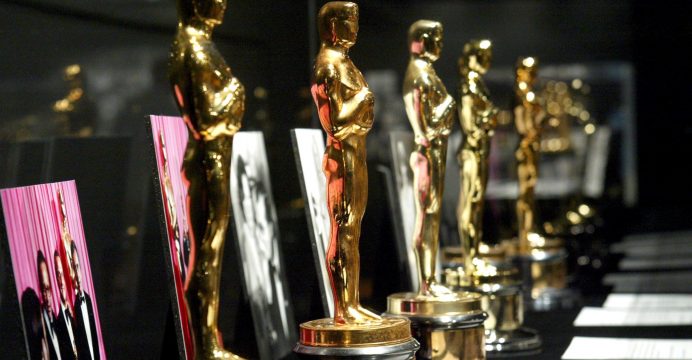 The Academy of Motion Picture Arts and Sciences (AMPAS) has announced the 91 tunes eligible to compete for this year’s Best Original Songs, including three from “La La Land” alone. The most recent award went to “Writing’s on the Wall” from “Spectre,” the second consecutive James Bond film to be so honored; Adele won for “Skyfall” in 2012. This tends to be one of the Academy Awards’ more inclusive categories, often going to movies that get little or no other attention on Oscar night: Other recent winners and nominees include selections from “Frozen,” “The Muppets” and “Fifty Shades of Grey.” The final nominees will be announced on January 24. Full list below:

“Just Like Fire” from “Alice through the Looking Glass”
“Rise” from “American Wrestler: The Wizard”
“Friends” from “The Angry Birds Movie”
“Flicker” from “Audrie & Daisy”
“Seconds” from “Autumn Lights”
“A Minute To Breathe” from “Before the Flood”
“Glory (Let There Be Peace)” from “Believe”
“Mother’s Theme” from “Believe”
“Somewhere” from “Believe”
“The Only Way Out” from “Ben-Hur”
“Still Falling For You” from “Bridget Jones’s Baby”
“F That” from “The Bronze”
“Torch Pt. 2” from “Citizen Soldier”
“Drift and Fall Again” from “Criminal”
“Take Me Down” from “Deepwater Horizon”
“Land of All” from “Desierto”
“Sad but True (Dreamland Theme)” from “Dreamland”
“Angel by the Wings” from “The Eagle Huntress”
“Blind Pig” from “Fantastic Beasts and Where to Find Them”
“One Frame at a Time” from “Floyd Norman: An Animated Life”
“I’m Crying” from “Free State of Jones”
“Gold” from “Gold”
“Champion” from “Hands of Stone”
“Dance Rascal, Dance” from “Hello, My Name Is Doris”
“I See a Victory” from “Hidden Figures”
“Runnin” from “Hidden Figures”
“Sixty Charisma Scented Blackbirds” from “How to Let Go of the World and Love All the Things Climate
Can’t Change”
“My Superstar” from “Ice Age: Collision Course”
“Seeing You Around” from “Ithaca”
“The Empty Chair” from “Jim: The James Foley Story”
“Audition (The Fools Who Dream)” from “La La Land”
“City of Stars” from “La La Land”
“Start a Fire” from “La La Land”
“Cateura Vamos a Soñar (We Will Dream)” from “Landfill Harmonic”
“Better Love” from “The Legend of Tarzan”
“Never Give Up” from “Lion”
“Equation” from “The Little Prince”
“Turnaround” from “The Little Prince”
“Moonshine” from “Live by Night”
“Loving” from “Loving”
“Hurry Home” from “Max Rose”
“Gone 2015” from “Miles Ahead”
“Wish That You Were Here” from “Miss Peregrine’s Home for Peculiar Children”
“I’m Still Here” from “Miss Sharon Jones!”
“How Far I’ll Go” from “Moana”
“We Know the Way” from “Moana”
“Even More Mine” from “My Big Fat Greek Wedding 2”
“Waving Goodbye” from “The Neon Demon”
“I’m Back” from “Never Surrender”
“Find My Victory” from “Olympic Pride, American Prejudice”
“On Ghost Ridge” from “100 Years: One Woman’s Fight for Justice”
“Ordinary World” from “Ordinary World”
“Devil’s Girl” from “Outlaws and Angels”
“Levitate” from “Passengers”
“Ginga” from “Pelé: Birth of a Legend”
“Nobody Knows” from “Pete’s Dragon”
“Something Wild” from “Pete’s Dragon”
“Dancing with Your Shadow” from “Po”
“I’m So Humble” from “Popstar: Never Stop Never Stopping”
“Stay Here” from “Presenting Princess Shaw”
“Celebrate Life” from “Queen Mimi”
“Back to Life” from “Queen of Katwe”
“Let the Games Begin” from “Race”
“Think About It” from “The Red Pill”
“The Rules Don’t Apply” from “Rules Don’t Apply”
“The Great Beyond” from “Sausage Party”
“Faith” from “Sing”
“Set It All Free” from “Sing”
“Drive It Like You Stole It” from “Sing Street”
“Go Now” from “Sing Street”
“The Veil” from “Snowden”
“Hymn” from “Snowtime!”
“Kiss Me Goodnight” from “Southwest of Salem: The Story of the San Antonio Four”
“Holdin’ Out” from “Storks”
“Heathens” from “Suicide Squad”
“Flying Home” from “Sully”
“Montage” from “Swiss Army Man”
“Petit Metier” from “They Will Have to Kill Us First — Malian Music in Exile”
“Letter to the Free” from “13th”
“Down with Mary” from “Too Late”
“Can’t Stop the Feeling” from “Trolls”
“Get Back Up Again” from “Trolls”
“Smile” from “The Uncondemned”
“We Will Rise” from “Veeram-Macbeth”
“LA Venus” from “We Are X”
“New Dogs, Old Tricks” from “What Happened Last Night”
“Runnin’ Runnin’” from “What Happened Last Night”
“What’s Happening Today” from “What Happened Last Night”
“Who I Am” from “What Happened Last Night”
“The Ballad of Wiener-Dog” from “Wiener-Dog”
“Try Everything” from “Zootopia”