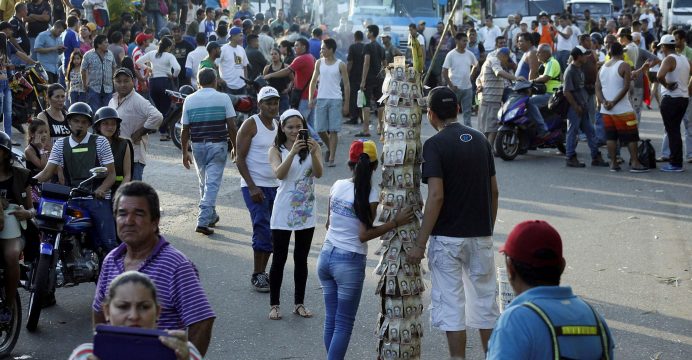 Desperate Venezuelans looted delivery trucks and clashed with police on Friday as a botched plan to introduce new banknotes left people without cash — the latest shortage in a spiraling economic crisis.

Faced with world-high inflation that has made its money increasingly worthless, the government is trying to introduce new bills in denominations up to 200 times higher than the old ones, reports BSS.

But the plan went off the rails when President Nicolas Maduro ordered the 100-bolivar note removed from circulation before the new bills arrived. 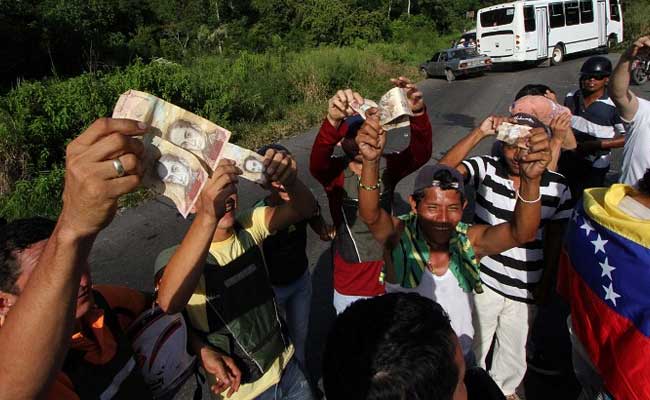 Formerly, the highest denomination bill, the 100-bolivar note was worth about three US cents and accounted for 77 percent of the cash in circulation in Venezuela.

Angry protests erupted around the country as the chaotic reform left people without money to buy food or Christmas presents.

In the second city of Maracaibo in the west, groups of protesters hurled stones at police, reports said. In the eastern city of Maturin, dozens of people blocked off a major avenue and looting broke out.

“I went by the market and it was being guarded by the military. A chicken truck was looted,” Juan Carlos Leal, a farmer in Maturin told reporters.

In the eastern city of Puerto la Cruz, “people rioted because they wanted to take out money and they weren’t allowed to,” said Genesis, a local baker.

“The police fired in the air to calm the riot. Everyone dispersed and the police ordered all shops to be closed,” said Genesis, who asked not to be identified by her surname for fear of reprisals.

Protests were reported by users on Twitter in several other states. Local media in the western city of Santa Barbara said four people were injured when the drivers of a security truck transporting money opened fire on people trying to break into it.

In the capital Caracas, thousands of Venezuelans from around the country queued to rid themselves of 100-bolivar notes at the only place still accepting them: the central bank.

Many were angry to learn they would only be allowed to deposit the old bills or obtain “special vouchers” for new ones.

“The world has turned upside down. Normally, there’s no food. Now there are no bills to buy it,” said Jesus Garcia, a 21-year-old food vendor who had been in line since 4:00 am.

Maduro has presided over an unraveling of Venezuela’s oil-rich economy as crude prices have plunged. The import-dependent country is desperately short of food, medicine and basic household goods.

Venezuela currently has the world’s highest inflation rate, set to hit 475 percent this year, according to an IMF forecast.

Maduro, whose popularity has plummeted, said the 100-bolivar note had to be killed because “mafias” were hoarding it abroad in what he called a US-backed plot to destabilize Venezuela.

In response, the leftist leader has sealed the borders with Colombia and Brazil until Sunday, exacerbating the chaos. Angry crowds massed in the town of San Antonio at a bridge crossing on the Colombian border, yelling “We want to cross!”

“We are suffering. We are hungry, we have no medicine, we have nothing. Nothing!” said one of the people in the crowd, Carmen Rodriguez.

“And now with this money problem, we can’t even buy food.”

The 100-bolivar note ceased to be legal tender on Thursday. Initially, Venezuelans were to have 10 days after that to exchange them at the central bank.

Maduro subsequently slashed the grace period to five days. Venezuelans had grown used to carrying around huge stacks of 100-bolivar bills for even the smallest purchases.

Now they are stuck trying to amass even bigger piles of 10-, 20- and 50-bolivar notes. Some companies have stopped dealing in cash altogether.

The new banknotes were initially to be launched Thursday, starting with a 500-bolivar bill and eventually reaching denominations up to 20,000. But the bills, which are being printed abroad, have yet to arrive.

“By removing the 100-bolivar bills, they are jamming up the economy,” said economist Alberto Martinez.

“Cash registers have no money. The system is under stress.”