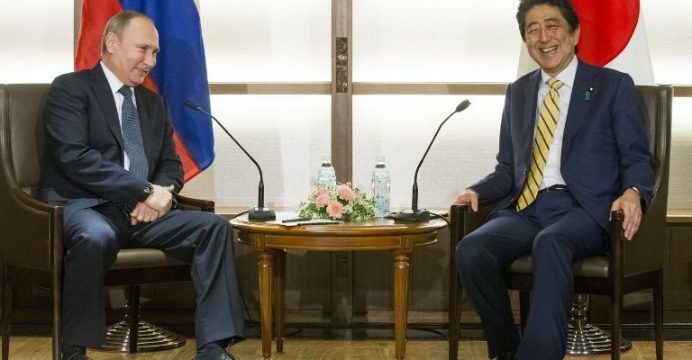 Japan and Russia on Friday wrap up a summit aimed at making progress on a peace treaty to formally end World War II, focusing on economic projects in small Russian-occupied islands claimed by Tokyo.

The second day of discussions in Tokyo comes after Prime Minister Shinzo Abe and President Vladimir Putin met on Thursday in Abe’s ancestral hometown in western Japan in the hopes of achieving a breakthrough, reports BSS.

Abe said they had a “frank” exchange of views and although they announced no major progress, the two discussed ways to cooperate economically in the disputed area. The Soviet Union seized four islands off Japan’s northern coast in 1945 in the closing days of the war.

Known as the Southern Kurils in Russia and the Northern Territories in Japan, the islands have prevented the two sides from fully putting the conflict behind them.

The summit is the latest attempt to reach an agreement since Japan and the former Soviet Union began discussions in 1956.

Putin, who is accomplished in the Japanese martial art of judo, has said he sees the lack of a peace treaty as an “anachronism” and wants to resolve the issue, while acknowledging that progress has been “difficult”.

Abe has looked to win concessions by dangling the prospect of major Japanese investment in front of Moscow, which is mired in economic crisis amid falling oil prices and Western sanctions over Crimea and Ukraine.

He said that the two discussed the joint economic development of the islands and making it easier for Japanese former residents, whose average age is 81, to visit.

Public broadcaster NHK, citing a government source, reported the leaders are expected to agree on an economic cooperation package worth some 300 billion yen ($2.5 billion), including private-sector projects such as joint mine development and loans for natural gas exploration.

Yuri Ushakov, a Kremlin adviser, told reporters that the two leaders called for experts to find ways to achieve joint exploitation of the territory, citing “fishing, tourism, culture and medicine”.

Business leaders from the two countries will also meet Friday. But few believe Putin is likely to hand the islands back, not least because of their strategic value sitting astride the entrance to the Sea of Okhotsk as well as Russian pride at having taken them as spoils of war.

A Japanese official briefing reporter on the talks suggested that legal questions could be a formidable stumbling block, notably regarding the regulatory framework for any economic projects.

“In any case, not damaging our country’s legal position is a prerequisite to joint economic activities on the four islands,” he said.