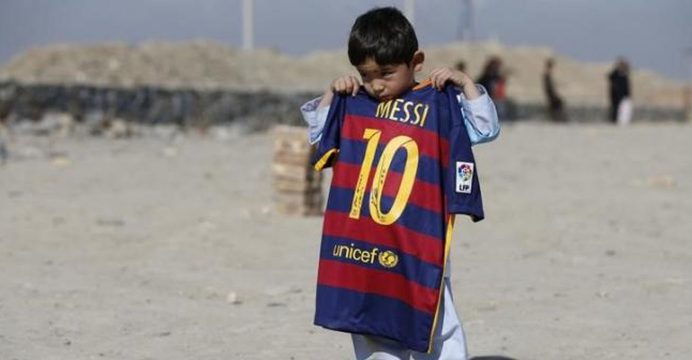 A six-year-old Afghan boy, who shot to Internet fame this year by sporting a Lionel Messi shirt made out of a plastic bag, fulfilled his dreams on Tuesday by meeting the Argentine soccer great.

Murtaza Ahmadi, from Ghazni province in rural eastern Afghanistan, accompanied Messi on to the field in Qatar before a friendly match between Barcelona and Saudi Arabia’s Al-Ahli in Doha.

Murtaza also joined the Barcelona team photograph and placed the ball on the centre circle before running back to Messi’s side, with the referee having to take the grinning boy from the field.

Murtaza’s picture went viral in January when his family, lacking the money to buy the Argentina shirt he wanted, fashioned a shirt for him from a blue and white plastic bag with “Messi 10” scrawled on the back.

In February, he received Argentina and Barcelona shirts in a package, along with a ball, from five-times world player of the year Messi.