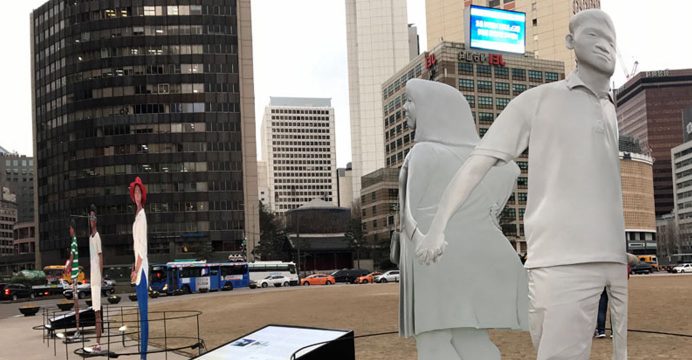 The number of migrants currently residing in South Korea hit a record high of two million this year.

“As the countries of origin of these migrants diversify, the need for an awareness-raising activities has increased for people to understand the dynamics of their changing neighbourhood, and their new migrant neighbors,” said Miah Park, IOM’s Head of Office in Seoul.

This is the second time IOM Seoul has collaborated with the sculptor. The campaign, which exhibits four sculptures of migrants at Seoul Plaza, began yesterday and will continue until 23 December.

The exhibition presents Yi’s three-metre high sculptures depicting siblings of a marriage migrant mother and a Korean father. For this year’s campaign, a sculpture of a very special couple, a North Korean man and a South Korean woman, was added.

“The sculptures represent neighbours of different backgrounds, who enrich South Korean society by bringing diversity to a traditionally homogenous country,” added Park. “By looking at the migrant sculptures, we hope more South Korean people realize that migrants are not strangers to them, but can be neighbours and family members.”

IOM Seoul has been organizing innovative awareness-raising campaigns since 2014. Its collaboration with Yi since last year received widespread coverage in South Korean media.

Yi is a distinguished Korean artist who distorts objects to provide different perspectives. Born in Seoul, he has built global reputation as a sculptor and has had individual and group exhibitions in New York, Singapore, Indonesia, Taiwan and several European countries.