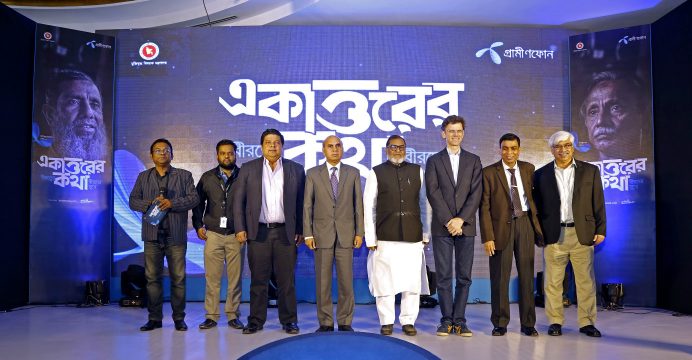 Grameenphone Ltd. has embarked on a mission to create a digital video repository of stories from liberation war, narrated by the Freedom Fighters. The aim of the initiative is to capture and spread stories of the Liberation War in the voices of the freedom fighters themselves. Grameenphone, with assistance from the Ministry of Liberation War Affairs, has taken on this initiative to keep the inspiring tales of 1971 alive, generation after generation.

Grameenphone announced the initiative at a press conference, held at the Westin Dhaka on 6th December. A.K.M. Mozammel Huq, Minister, Ministry of Liberation War Affairs was present as the chief guest on the occasion. M. A. Hannan, Secretary, Ministry of Liberation War Affairs,   Grameenphone CEO, Petter B. Furburg, CMO, Yasir Azman, and other officials of both organizations were present at the press conference.

It has been 45 years since Bangladesh became independent as a nation. In the last 45 years, we have lost many of our brave souls who fought valiantly to free the country. Unfortunately, with the passing of each freedom fighter, we lose their stories and our younger generations are deprived of hearing authentic stories of the battlegrounds.

Through this initiative, Freedom Fighters will be located nationwide, with the help of the ministry, and a youth community deployed to capture the stories. The intent is to create a visual documentary of each Freedom Fighter’s story of their participation in the liberation war.

Grameenphone will compile the collected stories from the battlegrounds and the Freedom Fighters’ dreams of an independent nation to create an online video repository. Twenty teams will travel across 64 districts across the country to collect stories directly from the Freedom Fighters and interview them through preselected questions. People will also be able to post information they have about a freedom fighter they know on the website (www.ekattorerkotha.com) opened in this regard.

Speaking on the occasion, the minister said,”We are also planning to initiate such a project but many thanks to Grameenphone for taking the initiative to create this video library. I hope others will also come forward like Grameenphone to uphold the spirit of liberation war.“

The initiative titled “Ekatturer Kotha” will run nationwide starting from December 6th for three months. On March 26, on Independence Day, Grameenphone will hand over the video repository with thousands of interviews to the Ministry of Liberation War Affairs. The repository will be available online and accessible to everyone.

“As the number of the freedom fighters decline with each passing day, it is high time for us to record their stories for the up and coming generations. The initiative will keep the stories alive, and instill the spirit of liberation war in the hearts of the future nation builders. As a nation, we are grateful to the founding fathers of Bangladesh, and if their stories go untold it will be an immense loss for our future generations as well as today’s youngsters,” said CEO of Grameenphone.

Our generation will be the last to hear the stories directly from the freedom fighters, but this initiative will immortalize the tales which led to the birth of an independent nation and pass those tales across to the next generations. The stories in their digital form will be accessible for all freedom loving people around the world.