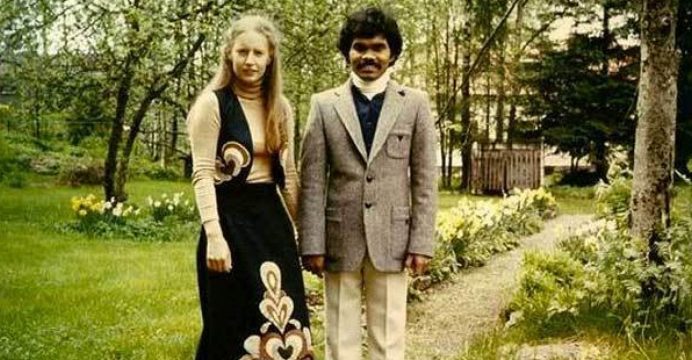 At that time, 19-year old Swedish resident Charlotte Von Sledvin was studying in London. While, Dr Pradyumna Kumar Mahanandia from India had just started making a name for himself as a gifted artist and gained popularity for his portraits, after having joined the College of Art in Delhi and overcoming his poor background and the dreaded caste system so prevalent in the country.

Sledvin having heard of this gifted artist traveled all over to India to get PK (as he was fondly called then) to make her portrait. As luck would have it, both of them fell in love with each other during the course of him making her portrait, She, with his simplicity and he with her ethereal beauty. What happened next sounds like it’s right out of a Bollywood movie plot.

The duo who were madly in love with each other by the time Charlotte had to leave decided to get married with her taking the Indian name Charulata.

As time for her departure neared, she asked her husband to join her, however PK wanted to finish his studies first. When she offered to send air-tickets later, he refused saying he would come on his own. And, after she left, the duo kept in touch through letters.

After PK completed his studies, the realization dawned on him that even though his heart made the promise of going to see his wife, his financial condition wouldn’t allow for the promise to become a reality.

But, not one to give up, he sold all his belongings and used the money to buy a second hand cycle- his weapon of choice.

In 1978, PK set out on his voyage to the far west to meet the love of his life. During the course of the next four months, he crossed Amritsar, Afghanistan, Iran, Turkey, Bulgaria, Yugoslavia, Germany, Austria and Denmark. His cycle broke down many times on the way and he even had to go on without food for days. But nothing could break his will. When he finally reached Gothenburg, Sweden, he was quizzed by Swedish immigration officers regarding his visit.

When PK told them his reason and produced photographs of his marriage with Charlotte, he was informed that Charlotte belonged to the royal family.

When Charlotte on the other hand heard about the man from Indian who cycled for more than four months, she immediately drove to Gothenburg and received her husband with unbridled happiness. Her family accepted him as one of their own.

And, now after 40 years of marriage, Dr PK Mahanandia serves as the Odiya Cultural Ambassador of India to Sweden and is a renowned artist and lives with his wife Charlotte and 2 children in Sweden.

Love indeed had no boundaries for this couple.

This story was originally shared by Satyanarayan Patri on Facebook a few days ago and the post immediately went viral receiving close to 10,000 shares.